Not surprisingly, Colorado’s United States Senators Michael Bennet and Cory Gardner appear to view President Donald Trump’s Feb. 4 State of the Union message in two entirely different ways. The differing viewpoints matched the contentious mood in the chambers of the House of Representatives; where Trump refused to shake Speaker of the House Nancy Pelosi’s hand before she introduced him, and Pelosi responded at the conclusion of the speech by tearing in two her copy of the speech.

“Not surprisingly, tonight’s speech was full of half-truths and outright lies. In his boasts about the economy, the president ignored that the American economy is creating jobs at a slower rate than when Barack Obama was in his second term. He ignored that farm bankruptcies are at an eight-year high as a result of his reckless trade policies. He bragged instead about his tax cut that gave $37 billion to the wealthiest Americans and large corporations.” 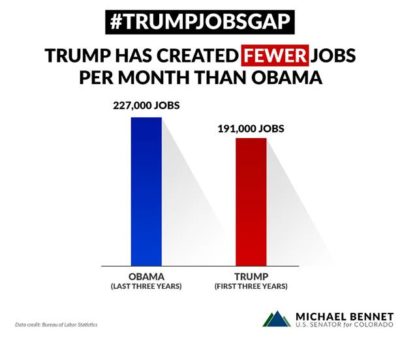 Colorado Senator Michael Bennet released a chart from the Bureau of Labor Statistics comparing the number of jobs created during President Barrack Obama’s last three years in office, compared to the first three years of the Trump administration.

In contrast, Gardner released a statement that said:

“Tonight the President offered a call to put division behind us and to come together to create new opportunities for Americans from every walk of life. A divided Congress does not mandate a divisive Congress. There is ample opportunity for us to work across the aisle to provide strong national security, to lower health care costs for American families, and to repair our country’s crumbling infrastructure. There’s bipartisan support in Congress and across our great nation to fix our broken immigration system, address rising suicide rates, and protect the public lands that we all cherish.

Representative Doug Lamborn added his thoughts to the mix:

“This evening, President Trump delivered a genuinely uplifting and forward-looking State of the Union speech. He highlighted many of his administration’s most significant achievements, such as: rebuilding our military, unleashing a booming economy, strengthening our national security, and advocating pro-family policies. I commend President Trump for rising above politics and looking for ways to better the lives of all Americans. During his 2016 campaign, President Trump made many promises to the American people, and despite partisan rancor, he has kept his promises. America is strong once again, America is safe once again, and America’s economy is booming once again.”

Bennet, whose candidacy for President of the United States continues despite formidable odds, added: “Everywhere I go in Colorado, people tell me they can’t afford some combination of housing, health care, child care, or higher education – in other words, a middle-class life. They’re worried about their children’s future. Political rhetoric and inflated statistics will do nothing to solve the real challenges they face every day.”

Gardner ended his written statement saying ‘We must remember that much more unites us than divides us as Americans. I hope that our nation’s elected leaders can rise to meet this moment to work in a bipartisan fashion to solve the most challenging issues facing the American people. It’s what Coloradans demand.”