This morning, Sept. 1, the Colorado Grand Jury returned a 32-count criminal indictment against three Aurora officers and two paramedics in the 2019 death of Elijah McClain. The unarmed 23-year-old was violently accosted as he walked home from a convenience store after buying snacks and injected with the sedative ketamine by paramedics.

Attorney General Phil Weiser made the public announcement of the results of the Grand Jury investigation, some two years after McClain’s death. 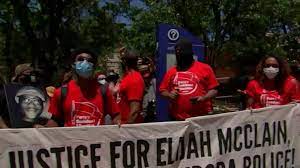 Since McClain’s death, there have been several marches for justice for Elijah McClain.Image NBC News

Indicted on 32 counts were:

All five face charges of manslaughter and criminally negligent homicide in the death of McClain.

“We are here today because Elijah McClain is not here,” said Wiser during his nearly 10 minute announcement of the indictments. He added that “We will be looking into whether there is a pattern or practice within the Aurora Police Department or the Paramedics of violating the civil rights of those they serve. He ended with his goal that “by working to build trust in law enforcement and advancing what responsible policing looks like we will advance justice for all Coloradoans.”

Polis’s office released the following statement about the indictments:

“Elijah McClain’s death was a tragedy and my thoughts are with his mother, father, friends, and family today. This innocent young man should be here today. I thank Attorney General Phil Weiser and the members of the Grand Jury for their work to hold those responsible accountable,” said Governor Polis. “I continue to urge my fellow Coloradans to consider how we can work together to build a better future where everyone can be safe walking home and a Colorado for all.”

“After two long years, we finally have some clarity on Elijah McClain’s case, and can breathe a sigh of relief knowing that these individuals will be held accountable for their vile actions,” said Senator Rhonda Fields (D-Aurora). “Today, I stand in solidarity with the McClain family, all of his loved ones, and the Aurora community, and commit to continue working together to advance meaningful criminal justice reform so we can create a world where black lives truly do matter.”

“Elijah McClain was a gentle soul who cared for others, who wanted to change the world, but whose precious life was taken from us much too soon,” said Senator Janet Buckner (D-Aurora). “Far too often, instances of police violence wreak havoc on communities of color, and so many Black men and women do not get the justice and accountability they deserve. Today, we got some accountability and a real path toward justice.”

Arrest warrants for all five were issued Wednesday morning. McClain’s mother Sheneen McClain said she was overwhelmed by the indictments. “It’s been a two-year battle just to get to this point,” she said. “It’s huge to know they’re indicted. But I know it’s not over. We still have to go to trial.”