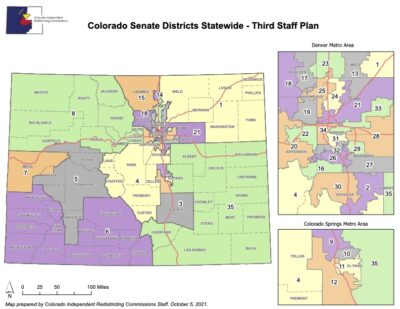 The adopted plan can be viewed at: https://bit.ly/3FGbEZM. Once a final Colorado Senate plan is adopted and conforming changes have been made by staff, full downloads and reports will be available on the commission’s website.

The plan was approved by a vote of 11 in favor and 1 opposed, fulfilling the constitutional requirement that a final map must be approved by a supermajority of eight of the twelve commissioners, including at least two unaffiliated commissioners.

The commission settled on the plan (unofficially titled HA.013) and made minor adjustments to the plan during the meeting, adopting it as HA.015. It will now be titled the Final Approved Plan. The deadline to approve a final plan for the state senate was Oct. 12.

“Coloradans have insisted from the very beginning that we create the best and fairest maps that serve everyone regardless of their political affiliation, who they are, or where they live,” said Chair Carlos Perez. “The House map that we approved last night is the culmination of countless hours of hard work and compromise by the commissioners and nonpartisan staff. I want to especially thank the citizens of Colorado for participating in this independent process. We have arrived at this important point together as true trailblazers and we could not have done it without you.”

As stated in the Colorado Constitution, the new legislative districts must: