In its third and final production of the season, Sopris Theatre Company at Colorado Mountain College will perform “The Nina Variations,” a comedic, heartbreaking homage to Anton Chekhov’s play, “The Seagull.” The theater company will stream the play online at the college’s Spring Valley campus in Glenwood Springs and present nine virtual performances from April 9 through 25. 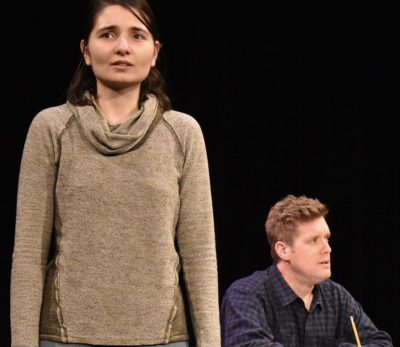 From left, Jaime Walsh as Nina and Chris Walsh as Treplev rehearse for “Nina Variations,” Sopris Theatre Company’s last virtual production of the season. The play streams in nine performances from April 9-25.

Written by contemporary playwright Steven Dietz, “The Nina Variations” traps Chekhov’s star-crossed lovers – Nina and Treplev – in a room and doesn’t let them out.

While the play is written for two actors, the playwright encourages companies to use multiple pairs of Ninas and Treplevs, so four sets of actors will perform the two roles. Directed by Brad Moore, the play features Chris Walsh and Jaime Walsh; Brendan T. Cochran and Christina Cappelli; Ciara Morrison and James Steindler; and Joshua Adamson and Bostyn Elswick.

As has been the case with previous performances this season, “Nina Variations” won’t be limited to the Roaring Fork Valley area but will include viewers throughout the CMC district, and farther yet, who can now “go” to the theater virtually and be COVID safe. The production will stream April 9-10, 16-17, 23-24 at 7:00 p.m.; and April 11, 18 and 25 at 2:00 p.m.

Tickets may be purchased via ShowTix4U.  Admission is $18 for adults and $13 for seniors and students, as well as CMC employees and graduates. Season ticket holders and CMC Spring Valley students must contact the Sopris Theatre Company’s box office at svticketsales@coloradomtn.edu or call 970-947-8177 to arrange tickets.

The 2020-21 season of Sopris Theatre Company is presented by US Bank.