With Daylight Savings having ended on Sunday, Colorado Parks and Wildlife (CPW) is reminding community members to be watchful for wildlife and avoid collisions. Wildlife experts advise drivers that “wildlife is on the move so be aware, drive with caution, and slow down especially at night.”

Sunday, November 7 marked the end of Daylight Savings Time in Colorado. With the clock set back one hour, it’s a good deal darker now driving home from work or evening events. Drivers and bicyclists are likely to witness more wild animals migrating to their wintering habitats during rush hour traffic on highways.

As the sunlight fades during high-volume commutes, Colorado Parks and Wildlife asks drivers to stay alert and share roads with wildlife. Autumn is peak seasonal mating and migration for many species, so drivers should watch for wildlife as they begin to experience darker commutes.

The Colorado Department of Transportation also advises motorists to stay vigilant, drive with caution and slow down, as winter storms often push wildlife from the high country into lower elevations.

“We would like to remind everyone that, as the seasons change, deer and elk will be showing up on roadways again. Keep an eye out for deer moving across roads and follow speed limits to reduce the possibility of colliding with animals. Deer move across our minor arterial roads all the time, and the best way to protect wildlife on the roads is to keep to the speed limit and keep our eyes up,” said CPW Area 18 Wildlife Manager Rachel Sralla. 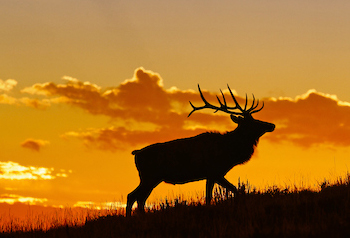 “Big game (like deer and elk) are making their way to the elevations where they can more easily find food and water. In Colorado, approximately 4,000 wildlife-vehicle collisions are reported each year,” said CDOT Wildlife Program Manager Jeff Peterson. “The seasonal movements of these animals can cause increased wildlife-vehicle collisions if drivers are unaware more wildlife is on or near the roadways.”

In an effort to decrease the number of wildlife-vehicle collisions in Colorado, CDOT has collaborated with CPW to develop wildlife prioritization plans for the Western Slope and the east slope and plains. From these studies, wildlife mitigation projects designed to allow wildlife to safely cross busy highways will be constructed at key segments identified for high risk of wildlife-vehicle collisions. Associated wildlife infrastructure includes wildlife overpasses, underpasses, and high fences with escape ramps and wildlife guards along highways.

One successful wildlife transportation solution is the Colorado Highway 9 Wildlife Crossing Project. In 2016, CDOT in cooperation with CPW and many other partners completed Colorado’s first-of-its-kind wildlife overpass and underpass system on Highway 9 between Green Mountain Reservoir and Kremmling. This innovative solution to keep wildlife off a busy road resulted in a 90 percent reduction in wildlife-vehicle collisions in that area. Check out the final project video.

With the success of the Highway 9 project, even more crossings are being built around Colorado, including one under U.S. 285 between Buena Vista and Nathrop. To learn more about ongoing collaborative efforts, go to Colorado Wildlife Transportation Alliance. See locations of completed crossings around Colorado at the new statewide wildlife crossing web map.

Projects recently completed or under construction include:

“Wildlife crossing structures are a win-win for wildlife and for people. These projects allow animals to move safely across the landscape for seasonal and daily movements, while decreasing the risk to motorists of having wildlife collisions. As traffic increases across the state, more roadways will become barriers to wildlife movement, therefore it is important that we work together to develop solutions to maintain healthy wildlife populations in Colorado,” said Cowardin.