It’s looking like Arkansas Valley residents can expect a summer with plenty of moisture. Terry Scanga, the general manager for the Upper Arkansas Water Conservancy District (UAWCD), is very optimistic after the heavy snowfall this winter. According to Scanga, ranchers, recreationists, outfitters and the like should see plenty of snow melt feeding the Arkansas river, creeks and irrigation ditches.

“We’re good, we’re really good this year,” said Scanga, referring to the current snowpack in the mountain ranges surrounding the Arkansas Valley. “We’re looking at a bumper crop of water.” 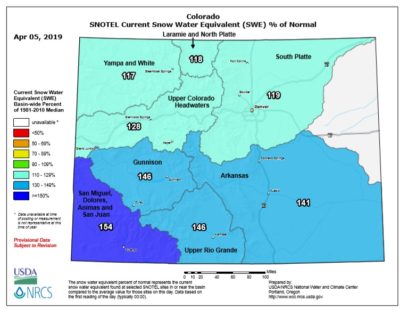 Snowpack across all Colorado River basins is more than 100 percent of average. Statistics provided by the U.S.Department of Agriculture.

The UAWCD closely monitors the Natural Resources Conservation Service’s (NRCS) snowpack measurements. Every Colorado basin is measuring more than 100 percent of average snowpack, with the four basins constituting the southern portion of the state all measuring more than 140 percent of average; good news after the past years with the southern half of the state in drought or near drought conditions.

For the Arkansas Valley economy, having plenty of water is vital; especially for the ranchers and outfitters.

Rafting typically tapers off in mid to late summer as the water levels drop. This year that may not be the case.

“Based on what we know, [the water levels] should be good into July and August when it’s critical for rafting,” said Scanga.

The wealth of water could make things more difficult for some sportsmen, like fishermen. Scanga pointed out that heavy flow could result in muddy streams and rivers, making fishing more difficult.

The rafting industry could experience some potential drawbacks should the snow rapidly recede from the higher elevations.

“If [the snowmelt] comes off too fast [the river] could be too dangerous (for rafting),” said Scanga.

While snowmelt conditions look good now, there is always the possibility that conditions could change quickly. Scanga, though optimistic, acknowledged that the threat of another summer drought still lingers. “We could [have one] if it gets really hot and we don’t get any [precipitation]. That potential gets less and less as we go.”

Ultimately, however, Scanga says he likes what he is seeing. “We are at the mercy of Mother Nature.” he said, “but based on what we know now it should be a good [year].”