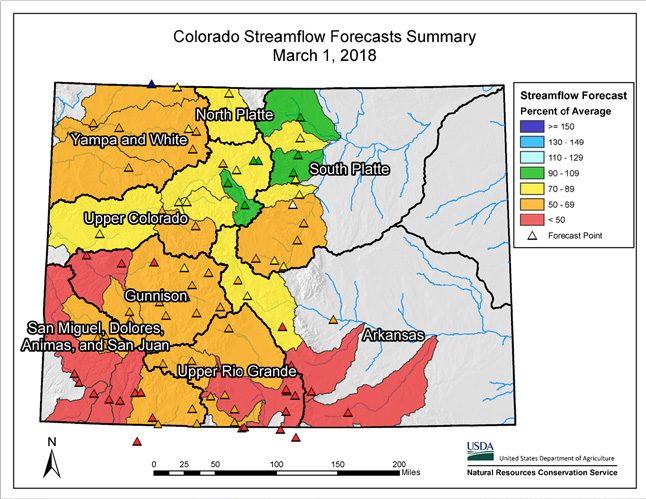 Colorado is currently experiencing the third lowest snowpack on record, with only 2002 and 1981 being drier, reports the Governor’s Water Availability Task Force. Extreme drought has expanded to cover most of Southwestern Colorado, the San Luis Valley and Southeastern Colorado.

The Fremont Pass SNOTEL site north of Leadville reports 100 percent of average, but every other Arkansas basin site reports below-average snowpack with a low of 6 percent at the Apishapa site in the southwestern Ark basin.

Arkansas basin water storage levels are the highest in the state at 145 percent of normal. Statewide reservoir storage is at 116 percent with all basins reporting above-average storage.

Streamflow forecasts are well below average for the vast majority of the state, which could affect the summer whitewater season on the heels of an anemic winter season for local ski resorts.

Short-term weather forecasts show that temperatures should be more seasonal with a normal chance of precipitation; however, longer term forecasts indicate an increased likelihood of below-average precipitation and above-average temperatures.

A weak La Niña is forecast to transition to neutral in May or June, indicating that warm and dry conditions will likely persist through the spring with above-average temperatures continuing into the summer months.