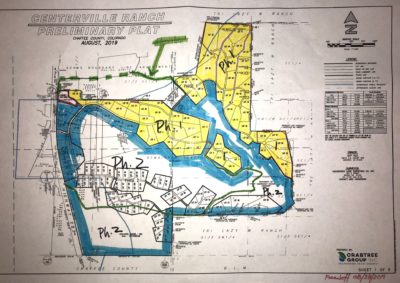 The Chaffee Board of County Commissioners (BoCC) unanimously voted to approve the preliminary plat for the Centerville Ranch subdivision in a special meeting on Wednesday, Sept. 4.

The two phases of the 903.6-acre project had a controversial beginning and initially endured intense community scrutiny. Because of the community interest and other obvious environmental impacts, the commissioners decided to hold several special meetings during the approval process. With only a couple of community members in attendance in the Fairgrounds meeting room, it appears their efforts have worked, and community scrutiny has waned as their issues have been answered.

County Planning Manager John Roorda also presented the commissioners with numerous government agency comments on the subdivision. Notably, Roorda said the Colorado Department of Transportation traffic study was insufficient, and further study during peak traffic times would be necessary. Colorado Parks and Wildlife did not support the development of surrounding adjacent lands and requested no additional fencing be built that could hinder wildlife migration paths. The Colorado State Forest Service requested homeowners be educated about wildfire dangers before building or occupying homes in the subdivision.

Groundwater study results were also reviewed and discussed.  The current groundwater supply and recharge rate under the platted subdivision provides up to 52.1 acre-feet per year. This could supply 133 lots, meaning that Centerville’s current 62 lot development is well within reason. The impacts on adjacent lands will, therefore, also be minimally impacted.

Along with the groundwater impact discussion, the commissioners discussed the visual impact proposal provided by the developer. Visual impacts were mainly addressed through building height restrictions of no higher than 28’ on individual lots. Building envelope restrictions also helped keep buildings set back from visible sight lines.

Commissioner Keith Baker made the motion to approve the preliminary plat as presented by the planning commission saying the final iteration, “More than adequately addresses the [previous] concerns of the public.” Commissioner Rusty Granzella seconded the motion and it passed unanimously.

“I am pleased with how it all worked out… I liked how it was front-loaded,” said Commissioner Greg Felt as he concluded the meeting.

The major subdivision will now move into the final plat stage of development, and come before both the Planning Commission and the Chaffee BoCC again at that stage.