During their Sept. 3 regular meeting, the Chaffee Board of County Commissioners unanimously approved a fee waiver for the Chaffee County Childcare Initiative; waiving not only the nearly $1,000 commercial permit fee, but also fees for electrical, plumbing and mechanical fees for the project which would create an infant-to-age-three childcare center in the old Poncha Town Hall.

“We’re dedicated to finding solutions to the county’s childcare crisis,” said Amy Lavato, who presented the request before commissioners. “We’re working with the town of Poncha Springs to put childcare in the old town hall. The town offered to lease it to us if we can get it licensed.” 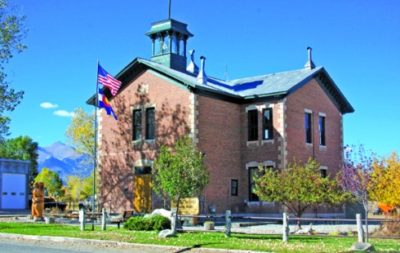 Lavato explained that Chaffee County Childcare Initiative is a new, non-profit effort, created in response to the county’s crisis in childcare options for young working families. It would operate in two rooms on the first floor of the old Poncha Town Hall, offering 16 childcare spots; with one room for infants and another room for toddlers under three.

The town has offered the non-profit a rate of $250 per month, as long as it can obtain a childcare license, which requires bringing the first floor of the building to state code for operating a childcare center.

“We need community support and we’re asking the county to help by waiving the fees,” said Lavato. “This is our first project. Once we have this up and running, we hope to establish more [childcare] centers.”

Asked if the initiative would be restricted to what families it will be offered to, Lavato said that “With the two classrooms we’ll focus on zero to three [year-olds]” She added, “This will be the only facility in the county that offers infant child care.”

Commissioners discussed the fees with county staff, deciding that they would frame their motion to include all county fees, commercial permit, electrical, plumbing and as yet unknown mechanical fees for a year, ending Aug. 31, 2020.

“This isn’t a big amount – but I recognize that there is a significant need [for childcare] in the county,” said Planning Manager Dan Swallow. “If we want to waive electrical and plumbing it would be best to do it now [rather than amending the motion later].

The move comes as the Chaffee County Early Childhood Council focuses on the State Action Plan to increase licensed childcare home providers and infant child care. A 6:00- to 7:30 p.m. Sept. 5 public meeting is scheduled at at the Salida Middle School Library, 520 Milford Street, Salida to discuss the impact of Senate Bill 63. It requires the Colorado Department of Human Services, in consultation with local stakeholders, to create the action plan to address the state’s growing childcare needs across the state.