During their Aug. 21 regular meeting, Chaffee County commissioners voted to postpone discussion about the broadband ballot initiative until their Sept. 4 meeting. It would override Colorado Senate Bill 05-152 the state’s telecommunications ruling that has been in place since 2005. Final ballot language for all items to be included on the general election ballot are due to Chaffee County Clerk and Recorder Lori Mitchell by Sept. 7.

Colorado SB 05-152 has been in place since 2005. It limits local governments’ ability to purchase, lease, construct, maintain or operate a facility to provide broadband services. This effectively constricts broadband services in rural areas, which are not economically attractive service area for large internet providers. This has limited service redundancy in cities like Salida, which has had repeated service interruptions.

In many rural counties, including Chaffee County, the law has contributed to the lack of even the most basic wireless telecommunications for areas outside towns and cities, or on public lands. Commissioner Keith Baker said that if commissioners decide to move ahead with a ballot issue, it will have both economic and public safety implications.

As it stands now, the law prevents local governments from providing cable television, telecommunications service, or advanced service, including high speed internet to subscribers. In addition, it limits the ability of local governments to purchase, lease, construct, maintain or operate a facility to provide these services either directly or indirectly. The state’s SB152 primer describes the measure as “a prohibition on public investment in broadband.” (https://co-wa.org/2017/01/26/senate-bill-152-primer/ )

The reason SB 152 is still news 12 years after its passage is that it contains a provision that allows counties and cities to be exempted from its restrictions. Twenty-nine of sixty-four Colorado counties and 66 of 270 Colorado municipalities (including the town of Buena Vista) have already voted to opt-out of SB152 restrictions.

Obtaining an exemption isn’t necessarily easy and requires that the public understand the reasons a county might put forward an opt-out option.

“Private citizens outside of government, at the grass roots level, bear the responsibility to write, fund, and approve a ballot issue,” said Centennial Councilman Ken Lucas. “The process requires a lot of educating of the public”. 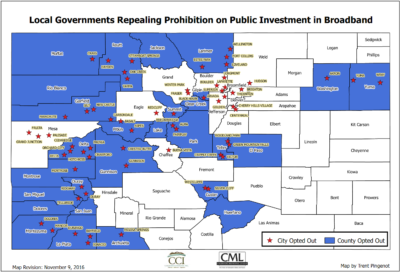