Chaffee County Commissioners came out of their April 1 executive session focused on the Red Flag Bill and rather than taking any formal vote to address Sheriff John Spezze’s request to them to declare the county a “Sanctuary County” it was announced that they would schedule a public meeting with Spezze to discuss his concerns. That public session regarding the county’s response to Colorado HB19-1177 (passed by the Colorado Senate March 28), will occur during their April 9 regular meeting. No public comment will be taken during that meeting.

“I feel that we owe the sheriff a response to his request,” said chair of the Board of County Commissioners Greg Felt. “I would like to discuss that as a group … We’re open to public comments and feedback, written or via email. It doesn’t hurt to discuss this with the sheriff on his points … I feel as county commissioners we can’t determine whether [the law] is constitutional or not. That is up to the courts to determine in the long-run. We are sworn to uphold the Constitution.” 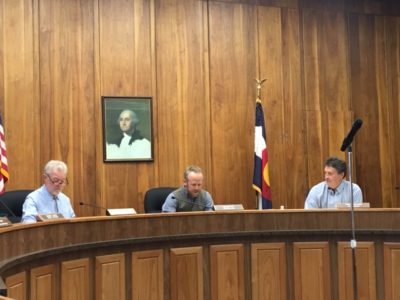 The move handily side-stepped the heavily-politicized Sanctuary County issue, for the time being, requested by the sheriff so the county could avoid enforcing the bill, should the governor sign it into law. But it does not mean the commissioners are in agreement on whether the Red Flag Laws, proposed to protect the families and neighbors of possessors of guns who are in the midst of mental health crisis from hurting themselves or other, could or should be enforced.

Commissioners appeared split two to one. Commissioners Greg Felt and Keith Baker both announced that they could not support any move toward a declaration of a Sanctuary County. Both said it would contradict the tenants of the entire United States Constitution and the Colorado Constitution, which all public officials take an oath to uphold and defend.

Commissioner Rusty Granzella came down somewhere to their right. “I’ve read the bill a couple of times. My interpretation of this law is that it is not helping the mentally ill at this time, the 14 points we’ve made are valid, and we need to stick to the constitutionality of it. We should determine we cannot enforce it until it is determined to be constitutional by a court [of jurisdiction].”

“I support the entire Constitution, that’s the Preamble, the Seven Articles and the Amendments,” said Baker. “I don’t want to do anything that weakens it. I’m not being opposed to the Second Amendment, it’s about supporting the whole Constitution. There is a process of judicial review – if it determines that all or part of the bill isn’t legal then that’s valid. But the three commissioners sitting here cannot determine the constitutionality of this [bill].”

Felt said that he wanted a public discussion to be about the problems pointed out by the sheriff that is within the commissioner’s ability to solve.

“When the sheriff approached me after the town hall meeting [March 23] and said he was going to make this request, my response was, ‘Please don’t just make a broad request (for sanctuary status)’,” said Felt. “Give us your specific issues, and give us a chance to address those issues. Addressing the constitutionality of the bill itself is not our role. We can address the problems the sheriff sees – and many are valid concerns. They would be concerns whether this bill had ever been filed in the first place. The issues are important. Period.”

The three were unanimous in not wishing to open public comments again, but on what changes might be needed to improve the bill, now that it has passed the state Legislature.

“I disagree. I don’t think they (those who spoke during the March 19 public hearing) expressed a need for a bill like this, I think they expressed concerns for mental health,” said Granzella.

Interestingly enough, neighboring Gunnison County has not had nearly the flap over the Red Flag Bill as has occurred in Fremont and Chaffee counties. “I talked with the chair of Gunnison County Commissioners Jonathan Houck, who said that none of their commissioners attended the Kerry Donovan town hall meeting there. Only one person mention the Red Flag Bill to him – as opposed to what happened here in Chaffee County,” said Felt.

Colorado HB19-1177 would become law 30 days following the day Gov. Jared Polis signs the bill. Challenges to laws through lawsuits would trigger judicial review of the bill in the court where the challenge is filed. The court where the lawsuit starts could challenge the constitutionality of the lawsuit, taking it into a high-level review. Other courts could wait to see what happens in that jurisdiction, before making decisions in their own jurisdictions to bring their own suits against the bill.

“Until it is struck down the duty is to comply [with the bill],” said Baker.