Since the very beginning, there seems to have been controversy over the Vandaveer Ranch parcel in Salida; originally bought by the City of Salida for its water rights. What to do with the land (then) was an afterthought. It was the early 2000’s, housing and land were still affordable and available, and growth in Salida was hoped for and not yet a trend. 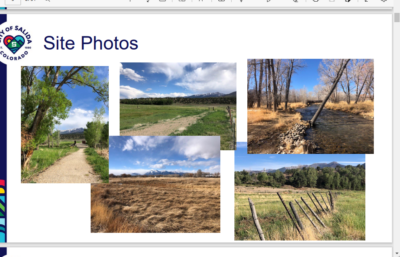 Now the property, which has gone through several name iterations, its latest being “South Ark Neighborhood”, is again at the center of a land use debate. The city is beginning the master planning process for the remaining portion of the original 190-acre parcel, located south of U.S. 50 and east of CR 107.

There are competing visions of what should be done. Some say it should be reserved for housing, others for education, others see a portion of it along U.S. 50 devoted to retail business. Still others want to see it put to various forms of recreational use, but don’t agree on what that might be.

A public meeting is planned for 5:30 p.m. to 7;30 p.m. Tuesday, January 31 at the Salida SteamPlant Ballroom to discuss the city’s master planning process.

While city planning has a vision that would include not just necessary open spaces, but an opportunity to add workforce housing near-in to the city center, another alternative vision is being promoted by a determined group of citizens, who see this as an opportunity to preserve open space.

There Have Always Been Competing Views for Use of this Land

The City of Salida purchased the 190-acre Vandaveer Ranch near the southeast corner of Salida in 2004 in order to obtain its water rights. The water rights were transferred, making the city’s grip on its water situation more secure, and the enterprise fund it represented solid. 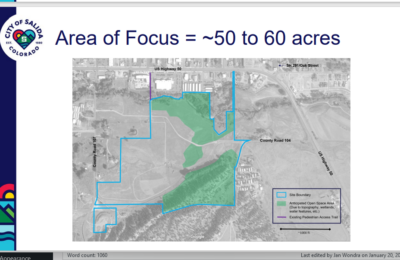 In 2009, the Salida Natural Resource Center Development Corporation (NRCDC), a Colorado nonprofit corporation, was formed to handle financing for the construction of the Forest Service building on the Vandaveer Ranch without incurring taxpayer liability.

The move ensured that the construction debt didn’t sit on the city’s books. The NRCDC operated with a board; it officially owned the Vandaveer land — and the debt for the construction of the U.S. Forest Service Building.

By 2011 the office structure was built, the lease was signed, and the U.S. Forest Service moved in. The problem was that the building, the land on which it sat, and the remaining land was now encumbered with a $3 million debt.

The recession hit, and for a few years, the board had a somewhat murky vision of what to do next.

They toyed with the idea of developing a portion of it as retail along the south side of U.S. 50 or selling off that portion, but the economy wasn’t favorable. Utilities had not been run from the city to the Vandaveer parcel on the south side of U.S. 50; a significant barrier to long-term development plans, requiring the approval of the Colorado Department of Transportation (CDOT).

By 2016, the NRCDC board crystallized a vision to retire the debt on the parcel and to find a way to return as much land as possible — unencumbered — to the City of Salida. With that clear vision, they set about negotiating the building sale as the first step.

About that time, several City Council members and then-city attorney Ben Kahn came up with an idea through Kahn’s real estate contacts, to conduct what many called a “fire sale” of the property to Kahn’s real estate contacts. If that roughly $750,000 sale had transpired, it would have vastly undervalued the Forest Service Building and the land, while leaving the remaining debt hanging over the city and the NRCDC with no asset to cover it.

In high drama during a memorable December 2016 meeting in the Salida Council chambers, the then-council tried to disband the NRCDC, and the NRCDC objected, preventing the fire sale. By December, 2018, the NRCDC board led by Ron Mazzeo had completed the sale of the Forest Service Building and a 48.5-acre remainder parcel, retired the debt, set aside a small wetland area of the parcel along the South Arkansas River as a park, and formally returned the remaining nearly 100 acres to the City of Salida.

The process from 2016 to today has included a Gentlemen of the Road concert on the space, a wildfire on Methodist Mountain, a global pandemic, a close brush with a financial fraud case, and laborious work on the Salida Land Use code.

Another reality of the remaining roughly 100-acre parcel still exists; it can never be completely developed. There are ditches, springs, drainages and wetlands on the parcel that require workarounds for any development. The city’s initial estimates are that 50 to 60 acres of the remaining parcel might be developable, so any master plan would need to take this into account. 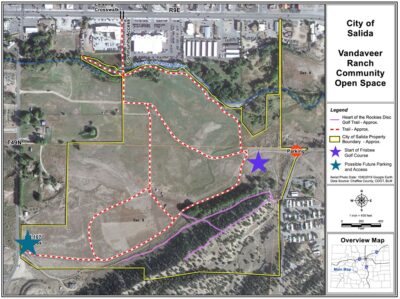 The opposition plan for the City of Salida Vandaveer Ranch. Image from Social media post

That would leave approximately 40 acres that could — and would — remain in open space. That has not stopped opposition groups from objecting to any development that is not basically all open space.

In October, 2022, David and Kathleen Armstrong sold two acres of land off CR 107 that was nearly surrounded by the Vandaveer parcel. “The agreement we made was that this area would be like sports fields and recreational area……not big apartments there,” said Armstrong. “We weren’t asking for anything that wasn’t in a model. They’ve mapped it.

“I hope that the 40 acres of open space is true,” he added. “I’m aware of the wetlands. One of those hidden springs backs up to my property. The development they’ve discussed is more to the south end. I do agree the taxpayers need to know what are we going to get out of it, but there has to be some community agreed-to scope.”

“A group of us are proposing the city keep this scenic and rare property as open space for future generations to enjoy and hope you’ll consider showing up to voice your support for this concept,” wrote resident Mike Rosso in his social media this past week. He offered a rough draft map of the opposition concept for the land which could include a disc golf course, hiking trails, and parking.

Given the current value of the land, the question could be raised — how do any plans being proposed help support the city’s tax base or pay for whatever development plan is finally approved?

Even open space is likely to require utilities to be extended to the area (electricity for public safety, water and sewer for bathrooms, etc.) which is a hefty expense for a city of Salida’s size. When considering such a parcel, municipalities normally do economic assessments of proposals to assess the real cost of the proposal; its impact on the city’s revenue versus expenses both immediately and over time.

Editor’s Note: Publisher/Managing Editor Jan Wondra has covered the saga of the city’s purchase of the Vandaveer Ranch since 2016.