During the Salida City Council regular meeting on Tuesday night, December 17, the Council heard from several concerned swimmers and pool patrons with regard to the temperature of the pool. 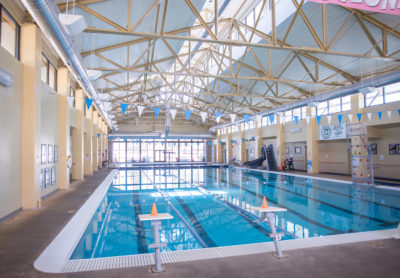 Head Coach of the Salida High School Spartan Swim Team and of the Salida Cyclones Wendy Gorie was first to speak during the citizen comment portion of the meeting. Gorie said, “We love working and are very grateful to have our kids swim at the Aquatic Center. The problem has become the water temperatures are so high in that pool, that my swimmers are getting sick.”

Gorie continued, “They are getting sick to the point of vomiting, having nausea, and I’m having to spray them down with cold water in the pool. We are not allowed to open the doors because it messes up the circulation system.”

Following her initial comments, Gorie provided national and international pool temperature statistics and regulations from various sources. She cited that pool temperatures above 82 degrees show an increase risk for stroke.

“I worry about these girls,” said Gorie, expressing concern due to an increase in ability from her team. “I am here to ask that you begin working with the recreation department to lower the temperature in the pool to 82. The level of workouts in the pools has been increasing as the team now competes at the state level.”

Relay record holder and Salida High School Junior Hannah Rude was also in attendance to provide a citizen comment about the pool temperatures. Rude shared, “I am one of the girls in the higher-level workouts and last night, I had to leave practice because I felt like I was going to vomit due to the higher temperatures in the pool.”

Rude continued, “For my goals this season for finals and state, having to leave workouts because I am overheating in practice is not going to help me achieve those goals. Last night was at an 83.5-degree temperature in the lap pool. We are asking for at least 82 [degrees].”

Rude went on to share names of fellow teammates who have felt ill. “I am one and we have easily had five other girls on the team this season that have gotten out more than once because of the temperatures.”  She pointed out, “We are some of the top swimmers on that team who have set really high goals.”

Fellow Co-Captain for the High School Swim team Elise Mishmash shared additional comments about the hot pool temperatures as a competitive swimmer, “I won a State Championship last February and I also have a scholarship to go swim at Minnesota State Mankato.”

Mishmash continued, “This year I hope to go back to State and win both of my individual events. In order to reach those high goals, I have set for myself, I need to be training hard. It’s really important for swimmers to have cooler pool temperatures because when you swim, you are not sweating, and the sweat is meant to cool your body down.”

Heart of the Rockies Regional Medical Center Nurse Tracey Hill and mom of children involved in the swim programs echoed much of the other girl’s concerns and shared what the medical risks are for both the youth users and the senior users of the Aquatic Center.  She mentioned hypotension (low blood pressure) and heat exhaustion which can lead to falls and stroke.

Towards the end of the meeting, Mike Pollock said he wished to revisit the concern from citizens about the hot temperatures in the pool. “I feel like there is urgency to what is happening to them and I would like to see if we can take action on that tonight,” said Pollock.

City of Salida Recreation Director Diesel Post was in attendance and stepped forward to provide his comments and assessment of the situation. “We have been doing our research to the best that we can. In competitive swim meets and sanctioned events we have dropped the temperatures down below 82 and sometimes to as low as 78 degrees.”

“The historic average [compiled from daily temperature readings], over the past seven years with every single day averaged together, the [Aquatic Center] has maintained an 82.24-degrees reading. Which varies,” said Post. “Our coldest month is in June and our warmest month is in October. So, the pool is hottest in October and coolest in June.”

Post explained how the hand-turned valves work in maintaining the water temperatures. He explained that there are no markings or flow meters and that it is based on the amount of spring water that comes in at 120 degrees. The lap pool is filled with a combination of the hot spring water and domestic water. Post said that since the domestic water is part of the equation, it actually costs the City more to keep the pool cooler than warmer, unlike the assumption made during citizen comments.

Post said there are several future steps that will take place to determine what pool temperature the Aquatic Center should try to maintain in the lap pool. “There is a lot to it. I have sent an email to the Recreation Advisory Board and we will be addressing this on Thursday [December 19],”said Post.  Costs for flow meters and more sophisticated control systems may also be pursued.

The major question to be answered by the community is for what — and who — does the pool exist? In January’s Salida City Council regular meetings, Post will revisit Council with comments from his discussion with the Recreation Advisory Board, concerned citizens and other community input that will be gathered.