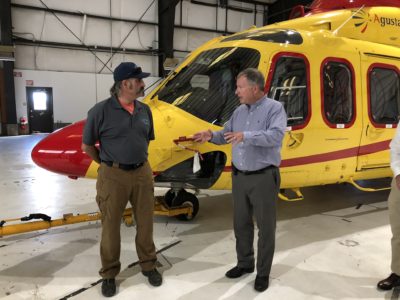 In starting the tour of the airport, Lamborn expressed interest in what the Buena Vista airport was doing with regard to helicopters: “Especially the helicopter angle, that’s new. When I was here last time about five years ago, I didn’t get that perspective.”

The topics in conversation with the tour included helicopter testing, what the impact has been from a difference in climate in minimizing fires, airport operations, and the history of the tarmac.

The tour moved outside onto the runway of the airport, where the Congressman and his staff accompanied airport manager Jack Wyles down the long stretch of runway.

Wyles said the runway is “one of the longest [runways] in the area. The name ‘Central Colorado Regional Airport was by design because we are meant to be an overflow for some of the other airports in the mountain areas. Specifically, Aspen.” 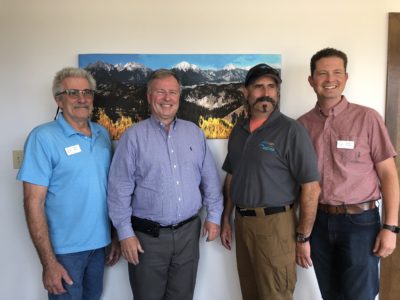 Wrapping up the tour, Lamborn headed into a meeting with the Energy Coalition to discuss utility resiliency.

Lamborn addressed the Energy Coalition, saying: “The military base in Fort Carson wants to have anywhere from two weeks to 90 days cushion in case of an extreme disturbance or weather attack on the server.”

He added, “They are looking at all the utilities. I might help them with funds on the military side if there’s a way to help them become a pilot project for military bases around the country.”