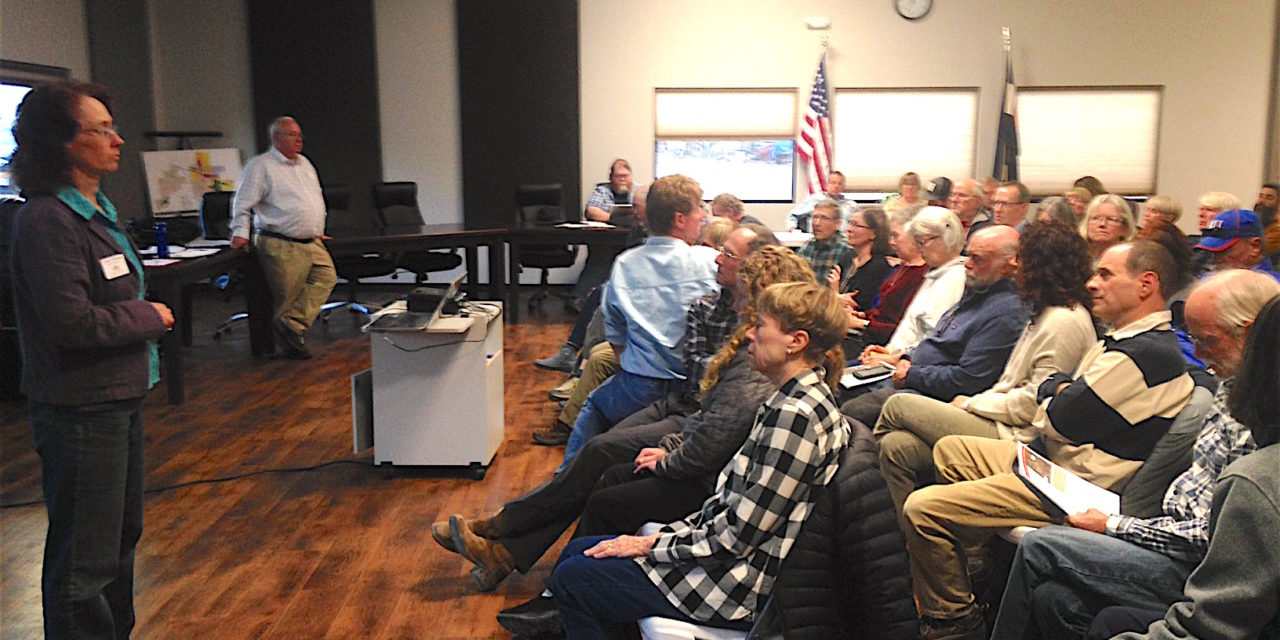 The Central Colorado Conservancy (CCC) meeting at the Poncha Springs town hall Tuesday, March 19, outlined the details of a land easement proposal it has crafted between the CCC and Centerville Ranch owner Jeff Ince. It represents a historic step forward in how the county can “grow smarter,” according to CCC Board President, Cindy Williams, and CCC Executive Director, Andrew Mackie, who detailed the conservation easement and its implications to a crowd of more than 80 county residents.

“What we want to do tonight is talk through this option with all of you.” Williams said to those in attendance, “We presented to the county commissioners and heard full-throated support from them.” 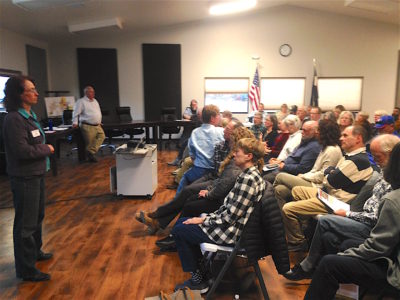 The CCC signed an option agreement with Centerville Ranch owner and developer, Jeff Ince, March 15, which will protect 70 percent of the 950-acre ranch in perpetuity as working (agricultural) lands.

“I’m very happy that we were able to put this deal together,” said Ince. “I think it’s going to be a win-win-win (for the county, for the developer, and for the environment). Really a positive thing all around.”

Now, the door is open for the CCC and the community to follow through on the concerns voiced when it was feared that development would threaten the rural view sheds among many other concerns.

Conserving Centerville Ranch is not feasible without public support. The CCC is responsible for $1.3 million of the $2.6 million cost of purchasing the development rights to the 650 acres. Ince is donating the remaining $1.3 million.

The CCC is asking the community for help to raise $100,000 to help cover the logistical costs of implementing the conservation easement.

Williams is confident the CCC will be able to raise the necessary funding to cover the remaining $1.2 million.

So, why is conserving the Centerville Ranch so crucial?

Williams says the Centerville Ranch embodies the things that the CCC desperately desires to protect. William’s presentation highlighted the numerous ways a conservation easement on this large swath of Centerville Ranch would protect and preserve the property while allowing Ince to continue with his development plans on a 300-acre portion of the property.

Not only is Centerville Ranch a visual gateway to epic mountain views from U.S. 285, but it also is a critical winter range for elk and deer. Elk depends on the property’s irrigated fields to sustain them through harsh winters.

The property also serves as an important wildlife travel corridor. In fact, according to Mackie, Colorado Parks and Wildlife has tracked deer migrating north through the Centerville Property. These deer start as far south as Salida and travel north, sometimes as far as Vail.

“We get a win-win solution here,” Williams pointed out. She said the conservation easement proposal will mean 74 fewer lots, or 55 percent less density than outlined in the revised sketch plan. This agreement is a full 73 percent reduction from the original sketch plan of 210 home lots.

Jim Thompson, a former county commissioner who served from 1993 to 2005, says he supports the plan in its entirety.

Near the end of the meeting, Frank Pirofalo rose from his seat near the back of the crowd.

“We’ve been vacationing out here for over 30 years. We’ve [lived] here for about eight years,” Pirofalo said, as he motioned to his wife, Paulie. “We aren’t wealthy, but we want to make the first donation.”

Pirofalo handed his check over. He and his wife’s generosity quickly caught on.

Jeff Ince’s hand shot into the air, “and I’d like to make the second!” he exclaimed.

Seconds later, another hand went up, and someone made the evening’s third donation.

Those interested in donating can contact the Central Colorado Conservancy by calling 719-539-7700. Checks can be mailed to PO Box 942 Salida, CO, 81201 and earmarked for the Centerville project.