This season’s epic snowfall, combined with what Chaffee and Fremont Counties say are tight budgets affecting road and bridge departments, came together to leave Salida resident Hans Pope stranded and injured in deep snow on Ute Trail in the late afternoon Wednesday, March 13. The saga on C.R. 175, which becomes Fremont C.R. 2 at the county line, resulted in a rescue the next morning. It highlights the public safety issues related to historic road maintenance policies in rural mountain counties, as well the gaps in cell coverage in more remote regions of both counties, and perhaps less than clear coordination between the counties. 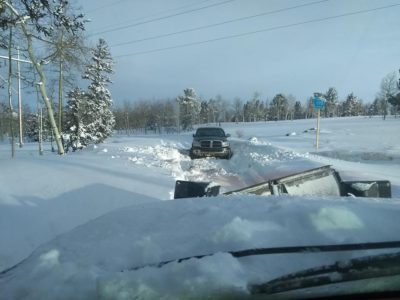 “It happened Wednesday night and I came upon him Thursday morning,” said Charlie Bearden, who lives in Whitehorn, a couple of miles east of the county line on Fremont C.R. 2. Bearden was headed down to Salida in his truck and heard the man calling for help. “The calls were pretty faint. I’m just glad I heard him.”

Southcentral Colorado received heavy snowfall Tuesday evening March 12 into Wednesday, March 13. Pope had gone up the trail to do photography, but the coolant in his truck had blown and he became stuck in deep snow. He tried for a few hours to dig the truck out, but with his back injured, tried to call for help. Cell coverage was spotty, and finally, his phone died. With nightfall coming and plunging temperatures, Pope managed to crawl to the Everett family hunting cabin over the county border on the Fremont County portion of the road (C.R. 2). The cabin was unlocked and Pope and his wife, Lori Roberts, figure the shelter of the cabin saved his life.

“If Hans didn’t know about that cabin he wouldn’t be here today,” said Roberts, who said he had called around 7:30 p.m. Wednesday evening to tell her where he was and that he was calling a friend to help him. But by 8:30 p.m. his cell phone appeared to have died. “He spent three hours digging and was getting weaker, he’s had spinal surgeries,” said Roberts. She said another friend went up looking for him, but couldn’t figure out where he was.

“Our dog Susie was with him and somehow Hans slipped and fell and hit his head. When he came to, there was a lot of snow still falling and Susie was sitting on top of him. He couldn’t feel his left leg or arm. They crawled through a barbed wire fence, and over a cattle guard. It took a long time to get to the cabin and when he got to that door he passed out and the dog tried to pull him inside.”

Roberts said when her husband came to, he managed to get in the door the rest of the way and found himself in front of an enormous wood-burning stove. His wet jeans had frozen solid. “He always keeps emergency things in his pockets,” said Roberts. He had a flashlight, matches, a lighter, some pieces of cotton. He scraped up what he said looked like deer hair and pine needles from the floor – enough to start a fire.”

Pope and Susie both survived the night. When he heard Bearden coming down the road the next morning (on a day when Bearden says he wouldn’t normally be on the road) Pope began to call out. “Charlie said he thought he (Hans) was a goner,” said Roberts. “Even when he was talking, he thought he was on his way out.”

“He crawled about a quarter mile to the cabin. He’d have died up here if he hadn’t gotten into the cabin” for the night, said Bearden. “But this is what we deal with. Chaffee County plows to the county line and this year, when it can, it plows onto our section of C.R. 2 and it really helps us over here. But Fremont County stops their plows miles from here. They don’t plow our county road.”

“I had to take a motor grader up there to clear our side and the Fremont road to get a rescue in there,” said Chaffee County Road and Bridge Supervisor Mark Stacy. “We plow all the way to our county line, but it’s a second-day plow road – meaning we don’t plow it the first day [after] a storm because we just don’t have the equipment and manpower to do it day one. This year, we’ve been plowing the road into Fremont County a few miles. Fremont says its a budget thing and they don’t plow that area.”

“We called search and rescue, but they said they had to cancel because the roads weren’t plowed,” said Chaffee Count Sheriff John Speeze.” In the end, it was the Forest Service Law Enforcement Officers who got to [Pope] after we got the call. We agree this is a safety issue.”

A call by Ark Valley Voice to Fremont County about the incident revealed that they had no idea the incident had occurred.

“This is news to us — we hadn’t heard about it, said Fremont County Chair Dwayne McFall. “I checked with dispatch, our sheriff’s department, road and bridges and our emergency rescue services. There are some cooperative agreements between Fremont and Chaffee, but I don’t know if there is one for Ute Trail. The sheriff’s department would have gone up there on snowmobiles and gotten him if we had known. We would have jumped in a plow or grader and tried to help. But you can’t help with what you don’t know about.”

McFall explained that past Badger Creek on C.R. 2, Fremont has no winter maintenance. “There never has been. We know the stretch of road you’re talking about, but the way the wind blows through there it’s impossible to keep that road clear.”

There has been an ongoing struggle by residents along Ute Trail on the Fremont County side for access from their homes. While county officials in Chaffee County appear to be working to try to maintain access, Fremont County has been less responsive because it says it posts the roads as “not maintained in winter.”

“There’s a challenge regarding safety,” said Stacy. “The reason I can do it, is [because] I have a blade going up there anyway as a second-day plow. As people are building further and further off grid it’s a challenge to get into these outlying areas. I can tell you their property taxes aren’t paying for it.”

McFall agrees that the road conditions are challenging. “There’s a lot of truth to these road conditions. There might be a little rock sticking up but it might be 30 feet deep – it’s hard on equipment. Budget restraints keep a lot of that from getting plowed. The way the wind blows up there it’s impossible to keep the snow plowed … you could throw a $1 million at it and it wouldn’t help.”

“But,” he added, “ we’re constantly having to re-evaluate where people live now.”

Roberts said that Pope was transported to Heart of the Rockies Regional Medical center around noon Thursday, and was released later that afternoon.

“There are a lot of people we are so grateful to,” said Robert. “ I hear there have been 20 cars up there stranded this winter. Hans was just up there to take photos – it was beautiful. But the conditions changed quickly – there were seven-foot snow drifts.”