Kimberly Parker, Democratic candidate for Chaffee County commissioner, looks you straight in the eye, shakes your hand firmly, listens carefully and weighs what she says before she speaks. Observe her and you pick up her work ethic, a clear, articulate intelligence and a grasp of the issues shaping this county.

Her campaign stance is known. She has worked on affordable housing issues for the past two years as chair of the Chaffee County Housing Policy Advisory Committee. She calls herself a strong advocate for human rights and economic opportunity. Her grasp of healthcare issues and how they affect families appears substantial. What is less known about this self-contained professional is what made her who she is today.

“I’ve used my experience to work on issues in Chaffee County, and I look forward to working on other important issues like childcare, housing and senior services,” said Parker.

Parker is a long-time Coloradan whose family goes back many decades in San Miguel and Ouray counties. Her 100-year-old grandmother lives in Montrose. 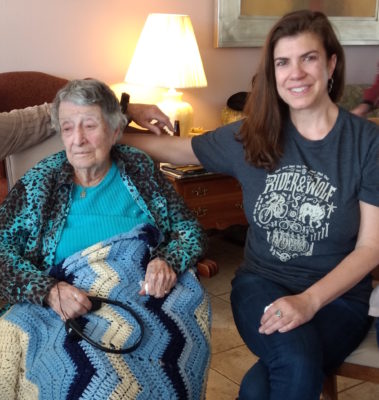 Her resume includes a degree in information systems from the University of Colorado-Boulder, followed by professional roles as a technical support engineer with Sybase Inc. and owner and lead IT consultant for Synergistics LLC. In 2010 she returned to CU-Boulder, advancing through multiple roles in technology at the university, including research data manager, continuous improvement manager and project manager. During that time she was selected for a two-year, system-wide University Perspective Leadership program.

While her early professional career was in technology, Parker has actively worked in child, youth and family advocacy since she was a teen. In 1989 she was part of a team setting up temporary medical clinics in mountainous Guatemala, getting medical relief to impoverished areas and orphans. By 2009 she was in Kenya, Africa, coordinating medical and educational donations to the village of Esabalu, and exploring options to set up a micro-profit-sharing carbon credit exchange, organizing accounting practices for a medical clinic.

In 2010 and again in 2016, Parker created the Milk Money Project, a fundraising campaign to purchase a heifer for a Kenyan family. The sale of the milk pays for their children’s school fees.

In 2015 Parker made a a career change, moving to Salida to be closer to family in this part of the state, working in technology in the valley, meeting people through out the county. She became a Family Resource Coordinator with Family and Youth Initiatives before taking a position with Alliance Against Domestic Abuse.

“I have history with these things, which is why I chose to do this work full time. I’m a proud survivor, like many people in this community,” said Parker. “Like many daughters, sisters and wives, we know how difficult this is to talk about. It’s difficult for many people to talk about violent histories because they don’t have safe spaces in our culture to talk openly … this only strengthens my resolve to be an example to our young people that we can rise above the bad things that happen to us.”

Rough starts don’t come much rougher than Parker’s. Kimberly has shared publicly that she grew up in a poor and abusive home. “My mother and I fled to Colorado and unfortunately a few years later the courts gave me back to my father, although he was homeless and living in his car.

“He drove us back to Appalachia and we lived on and off in cheap hotels,” said Parker, in a quiet voice. “I lived in trailer courts and rough, inner-city housing. Then he took off and dumped me with strangers. They passed me of to another family. I wasn’t able to go to school for months and I wasn’t allowed to contact my mother for years.”

When she was 17, just after her Junior year of high school, Parker escaped, coming back to her “safe place” – southwestern Colorado. From then on, she was on her own, changing her name to sever association with her father and supporting herself while finishing high school.

At an early age, says Parker, she found strength. “As a little girl I decided since I wasn’t as big and couldn’t fight physically, I would be stronger in my mind – to never let anyone tell me who I am … I understand it when people tell me they don’t feel free or protected in society.”

Parker, who legally cannot talk about a sexual harassment case she reported to authorities, says she understands those who report assault cases are often in a no-win situation. “If you don’t report a case you’re complicit when the accused hurts the next person. If you do, some can say you’re smearing them. If you settle, then you are money-hungry. If you refuse to settle, then they say ‘you’re dragging it out and making everyone suffer.’”

Parker is on record regarding the county’s key issues. “I’m super proud of the young people in our community coming forward and saying they need more mental health services. As adults, we need to help them in their request for more services, especially with Sol Vista. I’ve talked with (Housing Director) Becky Gray about the new senior housing concept; a continuum of care that will allow our seniors to stay here in the county and could include housing for the people who work at the senior center. We definitely need full day child care and full day preschool and an infant daycare center.

Parker says she wants to help expand the work that Commissioner Keith Baker has done pushing for broadband coverage. She has already talked with state representatives about the county’s communications challenges and met with Sheriff John Spezze about expanded cellular coverage for public safety.

When it comes to the natural resources of the county, Parker is concise. “We definitely need to mitigate wildfire risks. We have to make sure that Browns Canyon stays a national monument which means having a plan prepared by 2020 for the Bureau of Land Management. Our new comp plan will affect us for decades. So this third seat on the commission has to be filled by someone who is prepared, proactive, and collaborative.”

Parker says she chooses to focus on what’s important to the people who live here. “If you haven’t lived through certain things, it’s very difficult for some to understand. Affordable housing is my top priority. From teachers and nurses, to construction workers, our critical first responders, the people who wash the dishes in our restaurants and those who clean our hotel rooms, we should balance those voices – we need perspectives from different backgrounds. Our greatest housing need is for units from $500 to $750 a month. We don’t have the supply to meet that demand, so we need to focus our efforts here with public-private partnerships. People shouldn’t have to pay more than 30 percent of their income for housing.”

“Community is precious. People who talk about community — who have always had it – might not understand how precious it is when friends and neighbors become family. I will work to protect the things we hold dear about this place. I believe we are the ‘Heart of the Rockies’ – this community values itself on being kind – then we should look at this election thoughtfully and comprehensively as to how to serve the people. I have been service oriented my whole life. I am running because I have a belief in the call of making the world a better place and want to serve here at home.”