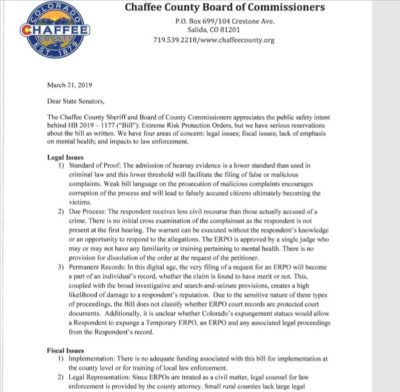 In a move that many had expected, the Chaffee County Commissioners and Chaffee County Sheriff issued a joint statement late Thursday, March 21, stating their serious reservations regarding HB2019-177 Extreme Risk Protection Orders, commonly known as the Red Flag Bill.

“All four of us are extremely concerned about mental health in Colorado and Chaffee County. And we acknowledge that mental illness is a significant contributor to gun violence in our communities,” the joint statement says. “However, this bill, as written, has serious deficiencies that undermine its intent and will likely place it at risk of judicial review and/or lawsuits.”

There had been calls during the March 19  public hearing on the Red Flag Law for the county to declare itself a sanctuary county if the bill becomes law. The commissioners and the sheriff  expressed concerns about such a questionable step. Commissioner Greg Felt made a point of saying that the Constitution bestowed powers on a divided government for a reason, and decisions about the constitutionality of laws belong in the courts.

The full text of the formal statement is available above, and below: 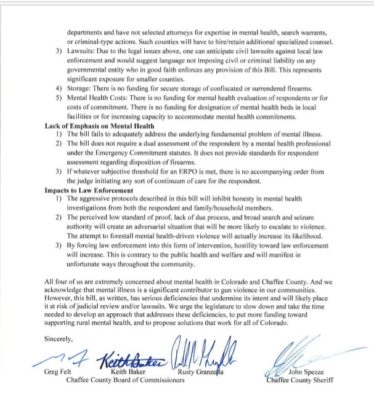