A cyclist on CR 156 last week probably wasn’t aware of the Chaffee County Right to Farm and Ranch rules – but neither was the motorist who, seeing a biker swerve out of the reach of a field sprinkler last week, called the Chaffee County Sheriff’s Department. The department sent a deputy to talk with rancher Cal Paplow, whose field sprinkler system was on that morning. The gist of the complaint was that field sprinklers bringing water to Paplow’s crops were getting both the field and the road wet.

“We weren’t going to go issue a citation or anything, just wanted to let him know,” said Sheriff John Spezze, who declined to provide the name of the motorist who made the complaint or the identity of the cyclist. “There is actually a Colorado statute on the books about impeding traffic on Colorado roads. The passerby said the biker swerved into the other lane of traffic and might have been hit.”

Paplow said the sheriff’s department told him it would have to give him a citation if they receive another complaint about the watering. “He said, ‘I have to do what I’m told, and I did look up the statute and I finally found it; it says something about you can’t water close to the road.’”

Paplow said other ranchers along CR 156 with sprinklers got warnings as well, but appeared bemused by the experience. “Water on the road is something that you’d have to give half the ranchers in this county citations for if you decided to go after us,” says Paplow. 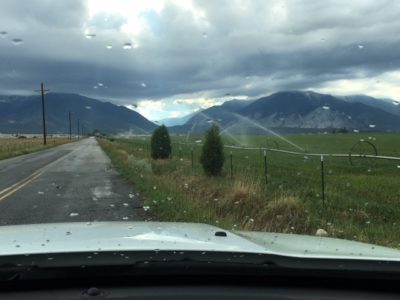 Field sprinklers on CR 270, like most rancher’s sprinklers in the county, often water nearby roads when the wind shifts.

He explained that in this dry county, “unless a rancher can water up close to the property line, you lose a couple furrows, and that’s important yield. What do you do when there’s wind? The wind will take and shift the water. Even if you set up your sprinklers only to hit your property, the wind can change in five minutes. So that day, I put a board up to block the water hitting the road, but then I don’t get yield out of the last couple furrows nearest the road.”

“As dry as the county has been this year, most ranchers are trying hard to get even one crop of hay,” Paplow said. “I know ranchers who haven’t even gotten one crop of hay; there were ditches that didn’t run. I’ll get one, maybe two, if I’m lucky. Being able to use our ditch water and our field sprinklers is key to that crop. Seems to me that watering is pretty key to ranching here.”

It remains unclear if the motorist saw the water sprinkler or simply a wet road. “It was a third-party passerby who said they saw water on the road, and the bicyclist swerved and almost got hit by a car,” said Undersheriff Joe McGuire.

The most recent Chaffee County Right to Ranch brochure says, in part, “(the county) recognizes that agriculture contributes substantially to the health and welfare of the local tourist economy and the area’s quality of life by helping to sustain the local aquifer and preserve the county’s water resources and to keep ground water levels accessible.”