Late Monday afternoon, Jan. 9, 11th District Court Magistrate Dayna Vise handed down a decision in a noise case filed by plaintiff Matthew Hobbs against the city of Salida and High Side! Bar and Grill (the Defendant) in the administration of its noise ordinance; dismissing the complaint. Further, Vise granted the Defendant’s “Motion for Judgment as a Matter of Law”, as well as granting declaratory relief in favor of the city.

This all means that the outdoor amplified music events that are a feature of the High Side! patio facing the Arkansas River during the high summer season will continue, as well as the less frequent year-round music performances. The court has affirmed the city’s right as a municipality to establish its own noise exceptions, and in the circumstances of this case, the court ruled that neither the city nor its permittees are subject to Article 12 [(section 25-12-103(11) C.R.S. (Colorado Revised Statue)] which covers state noise limits. 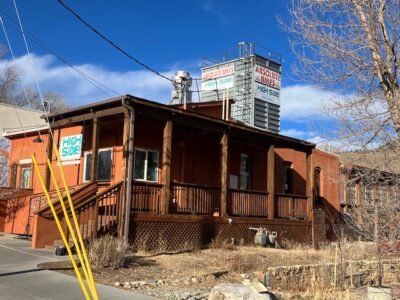 High Side! Bar and Grill frequently requests noise permits from the City of Salida for its outdoor musical entertainment. Photo by Jan Wondra

Hobbs, an attorney whose home is on the east bank of the Arkansas River across from High Side! Bar and Grill, had filed a complaint over what Hobbs and many of his neighbors viewed as excessive permits for amplified musical events which repeatedly violated the noise ordinance. His suit took issue with the city’s amplified sound permitting process itself.

He pointed out that the sound permits exceeded sound levels established in the state’s code (25-12-103,C.R.S.) and that given that, every entity issued a sound permit by the city in 2022 should not have been given a permit, including High Side!.

Hobbs’ request: for the court to consider restraining orders and injunctions to prevent the City of Salida from issuing any further noise permits, and to prohibit High Side! from carrying out any further open-air concerts.

The city, together with High Side! had argued that the complaint should be dismissed, because Hobbs hadn’t joined with all the interested parties to try to work out some solution short of filing a court complaint. In their view, trying to include all entities who had been issued noise ordinance permits wasn’t logical, as his complaint was with the sound levels coming from High Side!, not the other establishments granted permits.

Further, they argued that “since the purported noise violations resulted from musical events for which the City of Salida granted permits to hold music events, this statute specifically exempts them from the noise limitations of section 25-12-103, C.R.S.”

The new Colorado standard, known as the “plausibility” standard, requires determining whether a complaint states a claim upon which relief may be granted. Under this standard, the plaintiff must allege a plausible claim for relief to survive a motion to dismiss for failure to state a claim.

It went on to add that the City of Salida was defending its right to issue noise permits — both past and future — and that the city’s defense against the claims aligned with any other permittee that had received or might receive a noise permit.

Based on that, the Defendants motion to dismiss was denied. But Motion for Judgement as a Matter of Law was granted, declaratory relief is in the Defendant’s favor and the complaint was dismissed.