New court filings submitted in the defamation case filed in Denver District Court by Dominion Voting Systems Vice President of Product Strategy Dr. Eric Coomer, against former President Donald Trump and his lawyers, have far-reaching ramifications. The documents reveal that the big lie believed by nearly 80 percent of Republicans — that voter fraud played a role in the 2020 election — has always been just that; a big lie. 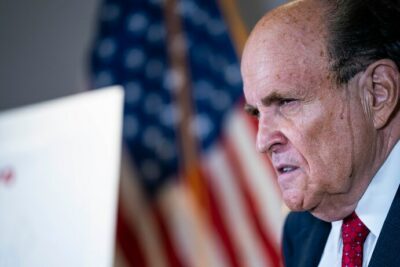 Rudy Giuliani appearing on Nov. 19 with Sidney Powell, made bizarre claims of massive voter fraud in the 2020 election. It turns out, none of it was true. Photo courtesy of The Washington Post.

Supporters of Donald Trump have continued to propagate the falsehood that there was massive voter fraud in the 2020 election, launching extravagant vote recount efforts such as the months-long effort in Arizona, and proposing hundreds of new election laws that if passed, will limit voting access for a broad swath of minorities. But it turns out that the president and those close to him purposely set out to deceive the American people and there are written documents to prove it.

“Legally the document had to be preserved, and that’s how we got it,” said Coomer’s attorney Charlie Cain, speaking to Ark Valley Voice early Thursday. ”

The new court filings show evidence that Trump’s campaign knew days after the 2020 election that wild claims about voting machine tampering were not true — and they knew two weeks before lawyers allied with Mr. Trump gave a major news conference in Washington D.C. making bizarre election conspiracy claims, attacking Coomer  — and said nothing.

Among their false claims; that voting software companies Dominion and Smartmatic had worked with financier George Soras and dead Argentinian dictators to steal the presidency, that votes were counted in Germany, and that vote tampering by Italian algorithms had stolen the election.

While that nonsense was being spoken of in aggrieved tones, Trump’s campaign had already determined that the wild claims made about Dominion Voting Systems and a different software company Smartmatic were false.

We know this because by the time planning for the Nov. 19 news conference was underway, perhaps worried about their own backsides, the Trump campaign had prepared an internal memo on many of the outlandish claims, documenting in writing that the allegations of massive voter fraud were false.

A Nov. 14 memo sent in response to a request by Trump campaign Deputy Communications Director Zach Parkinson, who asked for clarification on the claims swirling around the election results, admitted the allegations being made by Sidney Powell and Rudy Giuliani were not true. Among them:

That this is coming to light now appears to be the result of dogged discovery by Cain, who spent the last two months, quite literally working 24/7 conducting discovery, and deposing witnesses. Last Friday he filed the 150-page response on his client’s behalf in Denver District Court.

“The judge allowed us to depose all the defendants and get document production from all of them to respond to their anti-SLAPP motions,” explained Cain, referring to the response received after Coomer filed his defamation lawsuit. “No one can get the actual files yet, although I think the document is considered public.”

Cain explained that the reason for this delay is because the Denver District Clerk’s Office, reviews filings against classification security. There are three different document classifications: public, protected, and suppressed. If a document is classified as suppressed, then it is subject to a protective order meaning it won’t be made public.

But a document considered protected is one where a review is done to protect personal information (such as Social Security numbers, or in a child custody case information about the minor) then the rest of it is released to the public. “In this case, the document is being reviewed, but the filing is public,” said Cain. “That has been widely quoted – we embedded a lot of the exhibits in the filing.”

Cain explained that all the exhibits and deposition transcripts are all still protected “or at least they were as of yesterday,” said Cain, “with the exception of the Trump memo, which was published yesterday in The New York Times.

According to Cain, there is more to come out. “Not all of the defendants moved for a confidentiality clause, or to have the information suppressed,” he added. “So from my standpoint – it’s going to all come out and its pretty explosive.”