Sunday, Oct. 13 is a critical fire condition day, with humidity dropping to as low as five percent. Gusty winds are prompting Decker Fire Incident Command to issue a Red Flag Warning beginning at 11 a.m. and lasting until 8 p.m. tonight.

Residents of the areas that were previously evacuated are urged to drive with extreme caution. Crews are continuing to backhaul hose line, pumps and portable water tanks from locations where the equipment is no longer needed. 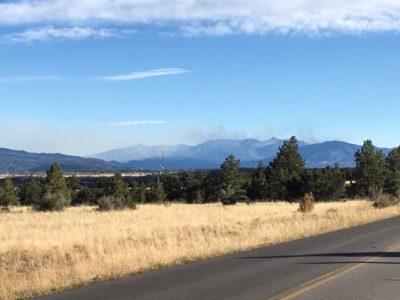 The spot fires that popped up on Oct. 12, causing areas around Howard to be put on pre-evacuation status, as seen from Mt. Princeton Saturday afternoon. (Photos by Jan Wondra)

On Saturday, a spot fire near Simmons Peak at the southeast corner of the fire grew in size and intensity yesterday, raising smoke plumes that could be seen in Salida. The fire is burning in a high, remote area and is being monitored by Division W. The structure group will continue to monitor structures to the east in the Howard area and help with back-hauling equipment where it is no longer needed.

On the southeast area of the fire behind Methodist Mountain, Divisions A and X, continue to conduct helicopter water drops to help cool an interior fire that is consuming unburned fuel within the current fire boundary.

In the northeast section of the fire, Division T firefighters have initiated a large ground ignition operation along the edge of the Rainbow Trail fire line. Crews are working to burn a three-mile-long stretch, which will strengthen the fire line by removing fuels from between the fire’s edge and the line.

Helicopters continue to deliver bucket drops of water to help prevent the ignited fuels from crossing the Rainbow Trail.

Also, in Divisions A and X, firefighters have completed new sections of containment lines along the west edge of the fire. On Sunday, the ground ignition operation along the Rainbow Trail will continue as conditions become favorable. Crews will be working toward each other, moving in from both the north and the south. This effort involves multiple ground crews, engines, and support from aerial operations. Chipping operations will take place along CR 101, as part of the effort to disperse fuels cut along the contingency line. 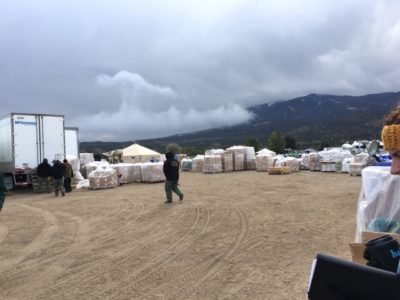 The hoped-for precipitation from the cold front that moved through on Thursday did not materialize. Humidity has returned to 5-10 percent.

On the east, Division W, work will continue creating a new bulldozer line that will stretch further east from the division. While Division A, X and Division R  will be patrolling, securing the fire line, and doing mop-up and equipment backhaul on the north and west of the fire.

Incident command has confirmed that the weather forecast calls for high winds, low humidity and clear skies, with no precipitation in the forecast. It increases the probability of ignition of pockets of unburned fuel in and near the active fire.

Fire crews will also focus on executing what is called the “Fire Suppression Repair plan.” The plan is intended to restore, as much as possible, the natural conditions of vegetation, topography and viewshed. These tasks include a series of immediate post-fire actions taken to repair impacts on the land from fire suppression tactics. The repairs are intended to minimize the effects of soil erosion, transport of sediment into waterways and the negative impacts on wildlife, including threatened and endangered species.

The fire has consumed 7,326 acres and is now considered 30 percent contained. There is 755 Personnel in the Decker Fire Type 1 Incident Command. As crews reach their assignment length limits and rotate out, other fire crews rotate in.