Dean Morgan comes on board as Buena Vista police chief 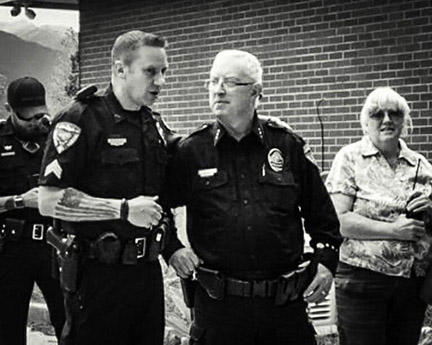 Sergeant Dean Morgan has taken the reins at the Buena Vista Police Department, coming in as chief, following the July 23 departure of Jimmy Tidwell, who had served the department for 34 years.

Morgan has worked 10 years with the department and gets officially sworn in by the town at the July 28 trustees’ meeting.

A fifth-generation Coloradan, he grew up in Colorado Springs and remembers watching Miami Vice, TJ Hooker and other 1980s cop shows. It prompted him to plan to go out into the world to do something that made a difference.

In 2000 he started working for the Park County Sheriff’s Office. One of the interesting things about Park County, he notes, is that it’s basically the size of Delaware. In other words, the 2,211 square miles is a lot of terrain to cover.

According to Morgan, as he looked at things, it just made sense to make the transition to the Buena Vista Police Department. His wife, Andrea, is a local photographer (she operates Autumn Twilight Photography) and their kids have been in the Buena Vista School District. A bonus: Buena Vista is 3.452 square miles.

“We were such a part of the community anyway,” he says. “I think the best thing about BV is just the sense of community. It’s a good place to raise a family, but it’s not a sleepy town.”

Similarly, he says there’s a sense of family within the police department. “Its smaller size is conducive to a family environment. It’s tight-knit.”

The promotion to chief means Morgan will be doing a lot more administrative work, spending more time in meetings, figuring out budgets, and buying equipment. It’s a rather abrupt change from the hands-on work of handling calls and interacting directly with the public.

When asked about the biggest misperceptions about small-town police work, Morgan quickly replied, “It’s fighting against the stereotype that nothing ever happens in a small town.”

He says a lot of the same crimes happen here as they do in cities – they just tend to happen in smaller numbers.

Morgan also says that social media skews the perception of what a police department is doing because “You’re not always seeing what’s going on behind the scenes.”

As for the challenges of small-town police work, Morgan says officers get to know the details of people in town a lot more than they would if they were in a large city. You respond to a call, then see the same people at the store, or at church.

“So it’s understanding the balance of enforcing the law, but also being accessible as a community partner and a friend.”

Morgan says law enforcement is at its best when it’s a community-wide endeavor, describing it as “when it’s hand-in-hand with citizens.”

“I’m a big advocate that if you have concerns, you can talk to us face to face. Wear a mask and still talk to us.”

Morgan says the COVID-19 pandemic has brought its challenges to policing. “First responders didn’t get time off during quarantines,” he says. He notes that the department has seen exaggerated behaviors in calls, where cabin fever and multiple levels of fear and frustration come to the fore.

“It’s been frustrating for everyone,” he says. “It’s recognizing what people in the whole country are dealing with right now.”