As the fight against the Decker Fire continues, there has been little increase in total acreage in the past few days. The fire area now stands at 8,727 acres. As of this morning, incident command has announced that the fire is 55 percent contained.

Hotshot crews on the northeast side of the fire (Bear Creek, Wellsville, Swissvale areas) completed containment in the Columbine Gulch “thumb” area. The crews are working on getting Bear Valley residents back into their homes. As of 1 p.m. Monday, Oct. 21, the Fremont County Sheriff’s Office lifted the evacuation order for the Bear Creek neighborhood, allowing only residents of Bear Creek back into the area. Residents are required to show their re-entry credentials to checkpoint security. Bear Creek will remain on a pre-evacuation status until further notice and patrols will increase in the Bear Creek area now that residents have returned. 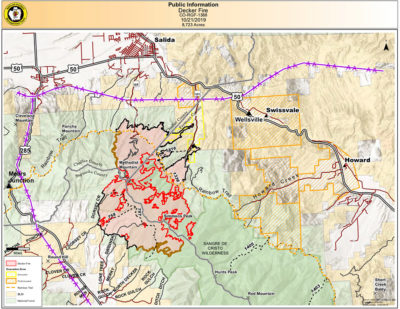 The dimensions of the Decker Fire as of Monday, Oct. 21. Note the thick black lines on the north and northeast sides of the fire, which indicate containment.

On the north-northeast side of the fire, which includes Pinyon Ridge Ranch, Boot Hill and Methodist Estates, crews continue to stage structure protection equipment in the areas where residents have been allowed to return to their homes after evacuation.

On the east-southeast side of the fire, along U.S. 50 toward Howard, crews are continuing fire suppression area rehabilitation and repair. Crews have almost completed this section of the Rainbow Trail. Chipping operations are ongoing. On the west-southwest side, the active fire area near Simmons Peak has barely moved, in part because of higher humidity and cooler temperatures.

Weather permitting, suppression repair on CR 101 and CR 124 are expected to be completed in the next day or two.

The fire was reasonably quiet overnight, with increased relative humidity as a result of snow at higher elevations and cooler temperatures. Smoke will continue to be visible as larger diameter fuels within the interior, such as tree trunks, continue to smolder, and winds will continue to be a factor. On the fire map, the black containment line has been extended in the area of the “thumb” and “fingers” on the east- southeast side (Howard/Hwy 50 area)

The bad news is that Chaffee County has moved into extreme fire danger levels for the year. The county is under fire bans, as are Lake, Park, Fremont, Saguache, Custer and Alamosa counties. That reality remains a critical factor in fire behavior. While Monday saw a wintery-looking front hover over the Sawatch Range, little of it reached the Sangre de Cristo area around Methodist Mountain, and high winds prevented aerial operations.

Resources devoted to the Decker fire as of Tuesday morning, Oct. 22 include 612 personnel from 19 crews and base incident command, 27 engines, seven water tenders, two bulldozers, and five helicopters of various types.