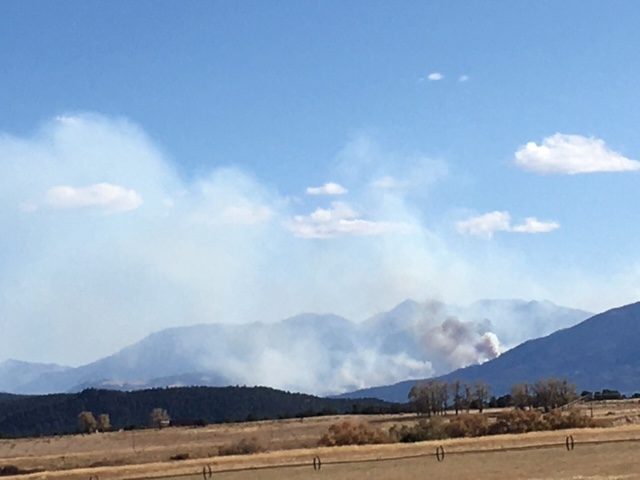 Salida residents got an update regarding progress on the Decker Fire on Tuesday evening, after two branches of the fire broke free this past weekend, jumping the Rainbow Trail. Incident Command told the couple hundred people assembled that structure protection crews were embedded in Bear Creek along CR 101, and in the past four days had built a control line to keep the fire from CR 101.

The two fire breakouts, called the “Columbine Thumb” and “Rock Finger” took a run that caused the elite fire fighting crews in Div. T to follow established safety procedures. The 184 firefighters on that section of the fire pulled back to safe zones to regroup, before re-engaging the fire. While a few outbuildings were lost in Bear Creek, there were no residential structures lost.

“Since then we’ve dropped 155,000 gallons of water on those two fingers and we’ve got contingency lines in that area,” said Operations Section Chief Mike Tombolato. “We’ve got lots of dozer lines [built], and we’re working it with helicopter water drops.” Referencing the fire’s proximity toward Howard he said, “We put a big shell of dozer lines around Howard. We have sprinkler stands at the homes, with pumps spraying water.”

Humidity continues dangerously low, with Red Flag warnings issued nearly every day. Winds were calm enough Tuesday evening to allow fire crews to begin a burn operation in Bear Creek, to remove fuels from a large area on the east side of the Rainbow Trail. That operation has continued on Wednesday.

Officials caution that patience is required, as smoke will most likely continue until a season-changing snowfall. There will be more smoke for the next few days as crews focus on the fuels in the Bear Creek area. “You’ll see smoke in that area Wednesday as we burn it out above Rainbow Trail,” said Tombolato. 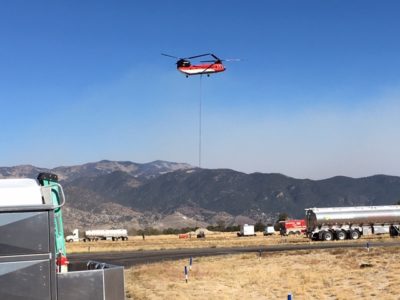 A Chinook helicopter is one of several helicopters dropping water on the Decker Fire, flying out of the Salida Airport. Photo by Jan Wondra.

The north side of the fire has had several spot fires and helicopter crews have been dropping water. The northwest side of the fire (Div. R) near the ridge of Methodist Mountain has been stopped on the same ridge line for 10 days, hung up on snags, burning down into stumps, and hemmed in by rock. While smoke is visible, Incident Command and the U.S.Forest Service say they are confident that it is not a threat.

Also on Wednesday, a bulldozer worked to improve CR 108. This road will be needed by utility companies for access to repair and maintain communications equipment stationed on Methodist Mountain.

Fighting the Decker Fire is a story in numbers. The fire stands at 8,464 acres and continues to be only 30 percent contained. At the moment, there are 806 Rocky Mountain Incident Command personnel on the job. The crews have worked through more than 10 Red Flag wind days, 80 degree heat and a 15 degrees below zero day.

As of last weekend, the cost of the federal response stood at $17 million. More important than the money, says Incident Safety Officer Keith Long, is the man-hours needed to fight the fire and the safety of those on the job.

“I feel about my fire fighters like my kids, I want them to be safe. This effort has already totaled 110,000 man hours. That’s 63 years of work with no lost time for injuries. This is dangerous terrain with snags and steep, rugged rock. Two days ago when the fire came out of Bear Creek …we talk about deliberate risk … they followed their training.”

“You’ll see smoke in that area Wednesday as we burn it out above Rainbow Trail,” said Long. “It’s what we call a ‘triangle of fire’ – it requires fuel, heat and oxygen. This takes care. We can’t get helicopters or fixed wings in that area. There are eddies up in the air above the fire. It’s dangerous enough that we’ve brought in a REM team [Rapid Extraction Module] in case we have to get firefighters out fast. It’s important that people have patience as we bring the fire down to us. If we go after the fire, someone will get hurt.”

The next rotation of Incident Command will be coming in to replace those who have been on the job for the past 14 days. The current crews were due to rotate out today, but will remain through Friday to work with the new crews coming in.

As  Incident Command leaders spoke one after another, the assembled Salida residents applauded them; the community’s gratitude for the enormous effort made by fire fighters, clearly on display.