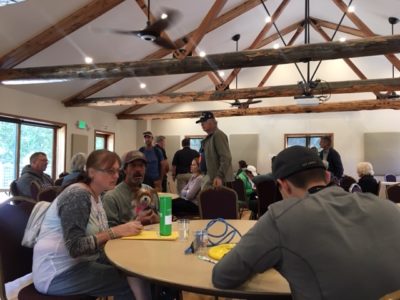 Evacuees signing up for re-entry badges at the Decker Fire Emergency Response Center set up at the Scout Hut. (Photo by Jan Wondra)

The Sheriff’s Office stresses that no re-entry will be allowed without an evacuation credential or valid ID. It also reminds residents that they are being allowed back into their homes still under pre-evacuation status. Should the fire continue in their area, they need to be ready to evacuate again.

The Chaffee Sheriff’s Office said that the Type 1 Team would be burning control lines in the affected area, and this fire will also be visible.

All residents still under evacuation order will be notified of a public meeting to discuss fire progress, which will be announced and held as soon as possible. 24-hour night patrols will continue in the evacuation area.

The Chaffee County Sheriff’s Office Command Post will be moved to CR 107-108. County Road 108 access and the power line road into the Methodist Mountain area will still be controlled. Residents of Methodist Estates and Boot Hill should respond to this new CR 107-108 location for escorts into their homes.

As soon as it is safe, the sheriff’s office says it will grant full access for residents of Methodist Mountain still under evacuation.