Colorado’s famous blue-sky October weather is not helping firefighting conditions on the Decker Fire. Again today, as a Red Flag Warning has been issued by the incident meteorologist for Monday from 11 a.m. to 8 p.m. The warning indicates a repeat of critical fire weather, including no precipitation, extremely low humidity, and west-southwest winds at 25 mph, with gusts to 40 mph. After 7 p.m. tonight, the wind is expected to shift to the west-northwest, with the strongest winds over the ridgelines and aligned drainages.

The critical weather conditions are described by incident command as fuels “Resistant to control, receptive to fire,” due to the long stretch of windy, extremely dry conditions. 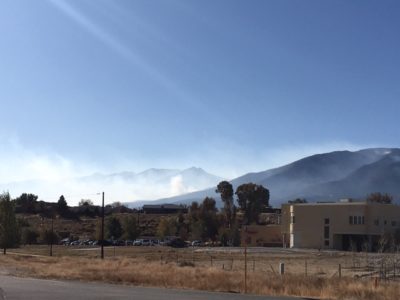 Smoke billows from the southeast side of the Decker Fire on Monday morning, visible behind Heart of the Rockies Regional Medical center. (Photo by Jan Wondra)

Sunday afternoon, after three straight days of these conditions, the fire escaped fire lines above Rainbow Trail on the southwest side of Methodist Mountain.

The fire’s run began around noon when aspen leaf litter added to existing fuel blowing the fire over the trail, moving rapidly toward the northeast. It created a situation in which Division T, 184 firefighters and their supervisors on the line, had to revert to fire command safety strategies to remain safe. Those are known as LCES, which stands for Lookout, Communications, Escape Routes and Safety zones.

Crews first used escape routes, then proceeded to their safety zones, accounted for all personnel, then regrouped to re-engage the fire.

Today, fire managers are assessing the fire edge to re-establish LCES before continuing to build a secure fire line on the east. In Division W on the northeast near Muddy Creek, a spot fire became active Saturday and continued to burn on Sunday. It was so smoky that air resources couldn’t see the fire edge to do bucket drops on the fire. Monday, bucket drops have resumed, and the crews continue to monitor the fire while building more bulldozer lines and a new contingency line halfway between the fire line and Howard.

In addition to the fire fighting divisions already working the fire in zones across the area, incident command has added another (Division Y) in the far southeast area to scout for possible contingency lines. Structure protection teams will monitor the fire spread in Bear Creek.

The fire area is now at 8,118 acres, and 30 percent contained, with gusty winds likely increasing fire activity and spot fires throughout the day Monday.

Interactive map for the Decker Fire:https://tinyurl.com