The Oct. 7 media briefing took place at the Chaffee County Fairgrounds, which is currently designated as the Incident Command Center for the Decker Fire. Incoming Incident Commander Jay Esperance, who coincidentally was also incident commander on the Hayden Pass Fire, provided a big-picture update. 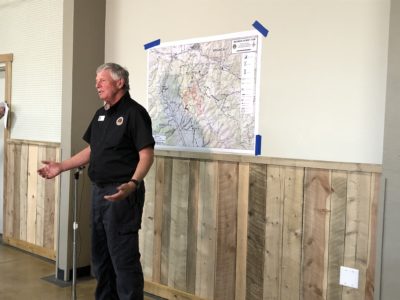 “As incident commander, sitting here and fighting the fire, I am very proud of the plan that our operations people have put together.

“I am proud of the 800 plus firefighters and their work in contributing. Part of the job is coordinating with the sheriff. We meet several times during the day, working on when we can let people back in their houses and also considerations we have to do for other evacuations.

“All those parts and pieces have gone extremely well, and I am very proud of the people working for us.”

The Decker Fire has now burned 6,326 acres, with five percent containment. Some 882 personnel are currently working on the Decker fire. 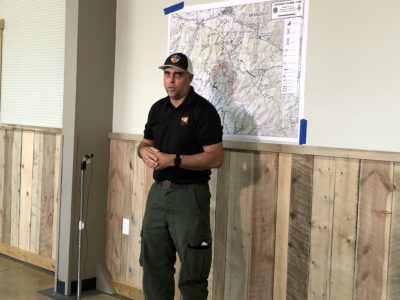 “We had a few really good days with the Decker Fire. We had favorable weather conditions that have allowed our firefighters to continue to construct indirect fire lines around the perimeter,” said Operations Section Chief Paul Delmerico.  “We did have the wind a few days ago but came out of that too, with very little fire growth. Firefighters continue today to construct and improve our indirect fire lines.”

Delmerico continued, “The reason we are not able to [go] right to the fire’s edge and [construct] direct lines is… [because] we have very steep, rugged and inaccessible terrain, without a lot of good features to get our firefighters directly to the fire line. We have a lot of beetle kill in the area that creates hazards… Due to those hazardous conditions [for firefighters], we are taking an indirect approach to construct the containment lines, which are away from the fire line.”

Monday, with unpredictable weather patterns, Delmerico said they expected “very dry weather with above-average temperatures for the area, about five degrees above average with very low humidity. Due to that, we are going to see an increase in fire behavior. Which we predicted and have prepared for.” 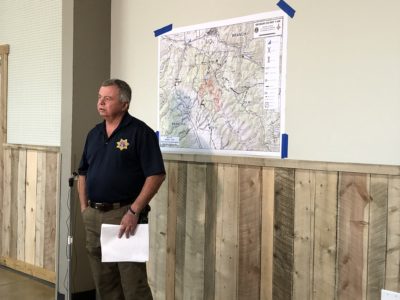 Chaffee County Sheriff John Spezze gave an update Sunday afternoon’s lifting of evacuation orders for some of the evacuated areas.

“Yesterday, we released part of the evacuation zone after confirming with our Type 1 personnel that conditions were going to allow several people back into their homes. We have sent a little over half of our evacuees back to their homes. We still hold two major subdivisions that were evacuated off of the main area on Methodist Mountain. [With] 73 homes still under evacuation … [effecting] about 180 people.

“We are evaluating the possibility with fire personnel whether or not people can go back, which is based on safety. As soon as we can, we will get people back.  We are doing ongoing evaluations, and when we have other information that we have sent people back, we will let you know.” 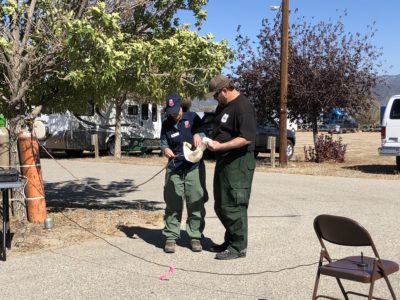 Meteorologist Aviva Braun is fine-tuning the weather balloon before release.

Within 90 minutes, the balloon had been carried by the wind to an altitude of 50,000 ft. It is being used to provide updated weather projections to the helicopter fire fighting teams.  With that information, a red flag warning was issued. Each firefighting aircraft and crew responded that they had received the message.

A live video taken of the weather balloon release can be found on the Ark Valley Voice Instagram story.

The current weather pattern is more likely to create more significant, higher plumes of smoke on Monday, as opposed to the way the fire laid down closer to the peaks over the weekend. Esperance said the plume behavior could contribute to embers that can sometimes start spot fires, something for which fire crews will be on the lookout.