Information released Oct. 7, at 10 a.m. cautioned that Salida residents could see increased smoke over the fire today in a larger, higher plume. The increased smoke isn’t necessarily due to more fire, but to “unstable weather pattern,” pulling the smoke upward, as opposed to the quieter weekend with wispy smoke closer to the peaks.

Pockets of fuel are still burning within the fire perimeter, and the spots on the west and east are giving off some smoke. The forecast of cold air, which is expected to arrive at the fire area Wednesday night, Oct. 9, with overnight lows in the 20s expected within a few days. 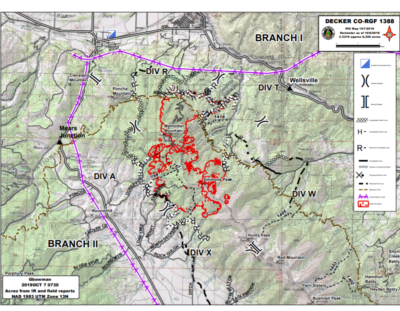 Giacoletto continued, “In Division T, firefighters have built a new section of hand line from the tip of the “arm” south, to wrap around some of the houses in Bear Creek. From there, they began working on the fire line from the end of Bear Creek and running southeast to join up with the Rainbow Trail. Firefighters in Division T also worked on improving their section of the Rainbow Trail.

“Crews in Division W used bulldozers to create a line that runs east and west between the wilderness boundary and the community of Howard. In Division X, crews kept scouting for options to improve existing roads and trails. Firefighters in Division A improved the bulldozer line running south from the Division A/R break. Aircraft was able to fly and do water drops for the entire day yesterday.”

With today’s weather expected to be unstable, incident command says firefighters will be on constant lookout for sudden changes in fire behavior. In Division R to the north, firefighters will keep improving an indirect and direct fire line, and they will work on clearing debris from CR 108.

Bulldozers have spent two days working the line from the Rainbow Trail south to the division break. Today, helicopters will fly a crew of firefighters and equipment onto the ridgeline. This crew will use hand tools to improve the bulldozer line, working back north toward the Rainbow Trail.

In Division T, firefighters are improving a section of the Rainbow Trail to keep working the direct line along the “arm” of the fire, looking for and cooling hot spots. In Divisions W, bulldozers will be building bulldozer lines east and west between the Rainbow Trail and Howard. Crews in this division will keep scouting for locations to construct an indirect fireline between the fire and the community of Howard. Crews in Division X will continue bulldozer work on BLM roads. In Division A, firefighters will work on the bulldozer line running south from the Division A/R break. The structure protection crews will remain present in Howard.

Yesterday, residents who were evacuated on the north side of the fire in Division R were able to re-enter their homes. However, this is still a lot of fire traffic, equipment, and personnel in the area as work continues. Anyone driving on roads north of the fire is asked to be extra cautious.