Decker Fire, not a stand down, but now a Type 3 response

Another milestone was reached on the Decker Fire Monday morning, Oct. 28, when a Type 3 Incident Command Team, headed by Incident Commander Matt Spring, officially assumed command of the firefight. 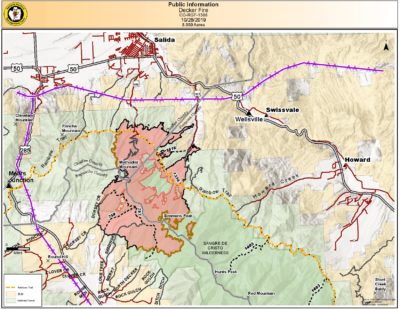 Snowfall has curbed fire behavior. There was no fire spread on Sunday or Monday, and the fire is considered 100 percent contained. On Monday, the fire stood at 8,959 acres, with 154 personnel remaining on the scene. The team was expected to release more personnel on Monday. They are spread across two fire crews, five engines, and one bulldozer, plus the air support of two helicopters.

On Monday, Oct. 28, the Burned Area Emergency Response  (BAER) presented its initial findings and recommendations for treatment to the Forest Service and local partners (to be covered in a follow-up article). This is the first step in what is considered will be a multi-step process to determine actions to address post-fire recovery action.

Monday’s move to a Type 3 response team is a welcome, and eagerly-awaited, piece of news for a fire that began with a lightning strike in the Sangre de Cristo Wilderness on Sept. 9. As the fire grew and moved, becoming a Type 1 federal response, personnel fighting the fire swelled to more than 900, with fire fighting crews arriving from across the nation.

Officials more than once reminded the public that the firefight would continue until seasonal snows arrived to put it out, which is precisely what is occurring. The wind-down of the Decker Fire coincides with catastrophic fires in California, where some of the fire crews were heading next.