Decker Fire will transition back to local units

Most of the firefighters and equipment have been demobilized now that the weather is conducive to travel. Those remaining will continue to work on taking care of the logistical concerns, to minimize the Incident Management Team’s impact on the local community. Local crews will continuously monitor visible smoke and act if necessary. If weather conditions permit, these crews may work to complete suppression repair tasks in the areas that will be accessible. 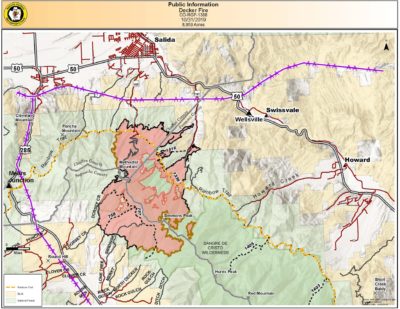 Incident command says that as the weather warms, dry fuels that retained heat are starting to warm back up. These large and heavy fuels have created some visible smoke.

With the precipitation of the past week, fuel moisture will steadily increase as the snow melts, which will eventually be enough moisture to cool these larger pockets of heavy fuels. Due to the continued cold weather, no fire spread is expected to occur from this smoke.

Frequently asked questions are on the status of containment of the Decker Fire, which incident command has explained. Due to the remote and rugged access to some areas of the fire, firefighters could only safely access 62 percent of the fire perimeter during peak activity. All of that 62 percent (100 percent) has been contained, which means firefighters have physically set foot on those firelines to declare those portions of the line contained. When looking at the fire map, this is displayed by the black line around a part of the perimeter.

The brown line around the fire map is the area where crews could not safely access. Incident command says that this brown line will be contained naturally in a season-moisture event. The snow that has just been received is part of that containment.

With the current weather conditions, all areas of the fire remain inaccessible due to snow. Therefore, fire managers are unable to confidently claim that the entire fire perimeter (including the brown lines) is completely contained. The areas with brown lines will be monitored by the local fire crews throughout the winter, though the moisture from the snow-pack will eventually put the fire completely out.