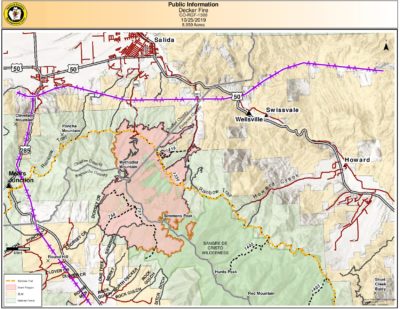 Two wildfire strategies called ‘Contain and Confine’ are currently being used in assessing the Decker Fire. The snow earlier in the week allowed incident command to formally declare that the fire is now officially 100 percent contained.

Information officers on the Decker Fire have reported that 62 percent of the fire is under what is called a “contain strategy,” while the remaining 38 percent is under a “confine strategy.”

The northwest area of the Decker Fire is rugged and does not have safety zones and escape routes for firefighters. According to incident command, it isn’t safe to insert firefighters in that area. This area is being managed through continuous monitoring and the use of helicopters to cool the fire as needed. An indirect fire line has been constructed, however. The likelihood of this part of the fire posing a threat to values at risk is minimal due to weather, terrain and the lack of active fire behavior. If a drying system moves into the area, additional firefighting tactics will be used to confine the fire in this location further.

Yesterday, the fire area received several inches of snow, lowering fire behavior to a minimum with little to no spread. Crews remained staged in camp for part of the day Oct. 24, due to concerns for safety and accessibility. They were able to access some parts of the fire in the afternoon safely. They performed suppression repair work, back-hauled equipment, and drained and removed “pumpkins.”

Today, Oct. 25, fire behavior is expected to be similar to yesterday. However, some smoke may be visible as heavy fuels warm and dry. Firefighters will continue suppression repair work. Seeding of dozer-impacted areas will take place in Division R on the north/northwest side of the fire.

The operational tempo of the Decker Fire is slowing, and needs are decreasing. Fire managers are working to right-size the organization accordingly. Several resources will be de-mobilizing today and in the coming days, allowing them to be utilized on other fires in the country, including the California wildland fires. Agency administrators and fire managers and planning for an orderly transition to a Type 3 Incident Management Team in the coming days.