Defiant, but Lacking Heat and Water, the Ukrainians Soldier on 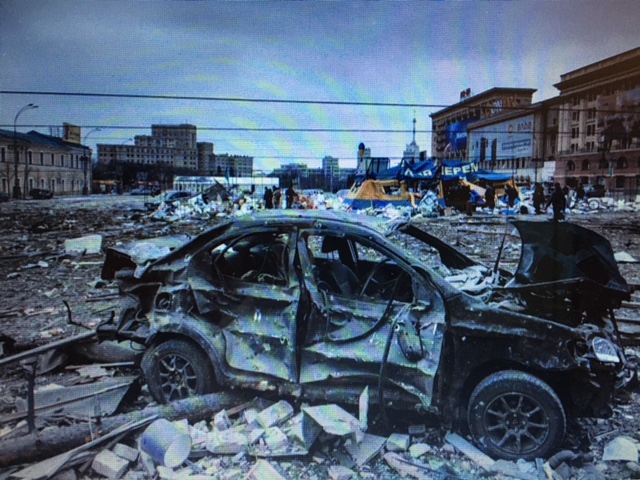 Americans may be considering themselves very thankful this week for concert tickets, Black Friday Sales, or a bountiful Thanksgiving meal shared with family. But perhaps more than anything else, we can be truly glad for the simple things: like heat, lights, and water. This isn’t something that can be taken for granted in at least two European countries right now due to the continued Russian invasion of Ukraine.

In Kyiv, Ukraine, the residential population has been bombed, terrorized, and now lives every day in survival mode since the renewal of heavy Russian bombing of Ukraine’s capital city. While the Ukrinian army is making great progress in recovering Ukrainian territory from the Russian army, the Russian bombing is purposely targeting Ukrainian civilians and energy infrastructure; knocking out at least one-third of the country’s energy resources.

This week the impact of the bombing by Russia of Ukraine, has spilled over into neighboring Moldova, a member of the European Union, disrupting electricity to at least half that country. While gas supplies to Moldova are not disrupted, the flow of gas is regulated by electric switches — meaning a large swath of this former Soviet bloc country is as much in the dark as Ukraine.

As cold winter weather sets in, the people of Ukraine are being forced to shift into survival mode; looking for water, scrounging for firewood, and living in apartments that if they haven’t already been bombed, could be bombed by Russia any day — or night — now. The residents of Ukraine’s capital city are nothing if not defiant and resilient — but it’s still only November with a lot more winter ahead.

Thursday marked nine months since Russia began an unprovoked attack on its neighbor; claiming erroneously that there is no Ukraine and that it was merely “driving out ‘Nazis'” and bringing it back into the fold of the motherland. As winter deepens, the trauma on civilians is only getting worse.

“The weather we have been preparing for and dreading is now upon the people of Ukraine,” said United Nations Under-Secretary General Rosemary DiCarlo in a status meeting with the UN Security Council on Wednesday that was called by Ukraine.

Attending the meeting via video link, Ukraine’s President Volodymyr Zelensky said “this is the Russian formula of terror. This is an obvious crime against humanity.”

Russia, which is a member of the UN Security Council has blocked attempts by the UN to de-escalate the crisis, blaming Ukraine and NATO (the North Atlantic Treaty Organization) for “conducting a proxy war with Russia.”  In the interest of facts, it should be pointed out that on February 24, 2022, Russia invaded Ukraine, making accusations that  Ukraine is using its infrastructure to attack Russian troops —  a lot like saying it’s the chickens’ fault that the fox is in the henhouse eating the eggs and grabbing the chickens.

If anything, this nonsense has served only to do what Russian President Vladimir Putin sought to stomp out: the Ukrainian people are more united, more sure of their identity as Ukrainians than at any point in their long and illustrious history.

On Thursday, the Associated Press spoke with some residents of Ukraine’s bombed capital, who clutched empty bottles in search of water, and crowded into cafés for power and warmth Thursday. Kyiv isn’t the only city in Ukraine under Russian siege, others have been as well. The situation has meant that the national utility has had to implement major, rolling blackouts, leaving the country without power for from four to 12 hours per day, affecting not just heat, light and water, but street lights, traffic lights, and underground train service.

Zelensky announced a program called “Points of Invincibility” to prepare thousands of makeshift enters to provide basic services in the event of prolonged blackout — at the top of that list — heat. Just in Kyiv, municipal workers have set up at least 1,000 heated shelters that can double as bunkers for hundreds of people.

While these acts of survival are being rolled out by Ukrainians, another note of solidarity was sounded by the European Union. They voted overwhelmingly this week to label Russia a state sponsor of terrorism.