The Chaffee County Board of Adjustment will hold a public meeting beginning at 5:30 p.m. Mon. Nov. 18 in the Commissioner’s Meeting Room at 104 Crestone Ave., Salida, in a case that could have ramifications for other Chaffee County land owners, ranchers and farmers, as well as land owners across the entire state of Colorado.

The case involves an appeal made by Alison Brown of an administrative interpretation made last year by Chaffee Planning Manager Jon Roorda, that two adjacent, but separate, parcels were one parcel. Brown owned and purchased the parcels separately, and each were recorded in the assessor’s office as separate parcels. But Roorda’s staff report said the county would treat them, for purposes of interpretation of Article 15 of the Chaffee Land Use Code, as a single parcel. 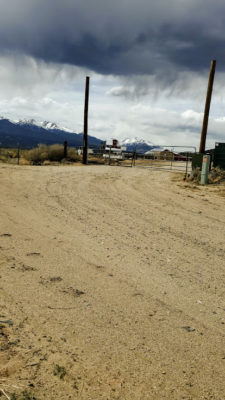 The entrance to Brown’s property at 11600 Antelope Rd.

The case had involved Brown’s request for a kennel permit for her pre-existing American foxhound kennel at 16000 Antelope Rd. (the rules had changed after she purchased her property). When she was denied an occupancy permit in Dec. 2017 for the new home she had built at 11600 Antelope Road, due to the outstanding kennel application, she had applied for a temporary camping permit to reside in her camper on that site while she awaited the occupancy permit.

When the county denied that request, she requested a permit to place the camper on her adjacent parcel at 11555 Antelope Rd, at which point Roorda declared that the two parcels, in the county’s view, were one parcel, again denying her camper permit. It in effect left her homeless.

Brown originally filed this administrative interpretation appeal in March of 2018. In requesting again that the appeal be heard, Brown referenced the July, 2018 decision by District Court Magistrate Hunter.

Hunter wrote; “As for the determination of the meaning of “lot, parcel, tract” as it appears in the County’s definition of kennel, the Court agrees with Defendants. 11555 Antelope Road and 11600 Antelope Road are each their own distinct parcels and have not been consolidated pursuant to C.R.S. §30-28-139. Additionally, this case involves the use of property as opposed to valuation, conveyancing or other types of regulation. Finding that there are two parcels for the purposes of the County’s definition of “kennel” is therefore consistent with Wellman v. Haug. There, the court was tasked with determining the definition of “lot” and it did so based on how the term was “used in the covenant” in question. 360 P.2d 972, 190 (Colo. 1961). Interpreting the definition of parcel such that Defendants lose the right to keep seven dogs on their property simply because they own property next to it is a deprivation of the use of their property and without any valid basis.

Pursuant to C.R.S. § 30-28-129, the County cannot merge two lots or parcels without doing it through ordinance, regulation or resolution that requires a public hearing as well as the consent of the owner of the parcels. Roorda’s merging of the two parcels in his Land Use Code interpretation is also in violation of the County’s own governing statutes.”

The case could have serious ramifications for ranchers and farmers, or any rural land owner who might have purchased parcels adjacent to their original land holding. If by virtue of the adjacency, the parcels were to automatically be considered part of a larger land holding, this could limit the landowner’s ability to develop or use their land, or possibly to resell the parcel.

It should be pointed out that the ability of the Board of Adjustment to hear citizen appeals against county staff decisions is an important part of the checks and balances of our system of local government. The purpose of the Board of Adjustment constitutional process is to provide a mechanism for citizens to counter staff decisions that could overreach both Colorado and Chaffee governing statutes. The alternative to this free process is the pursuit of expensive legal options in a court of law.