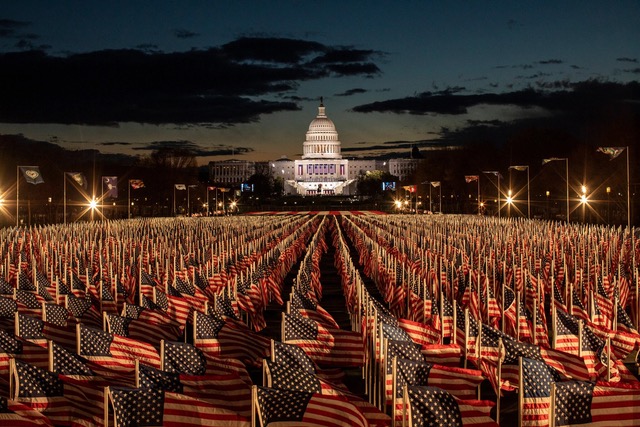 The pageantry of the day paled behind the significance of the event. Joseph R. Biden Jr. became the 46th president of the United States at 12:08 Wednesday, in a ceremony on the very Capitol steps, where two weeks earlier, to the day, they had been desecrated by violent domestic extremists. The extremist’s spray paint hate messages were still visible on the columns of the Capitol.

The ceremony was already going to be drastically different due to the ravages of the COVID-19 pandemic, but it became a unified message condemning extremism and reinforcing the care necessary to reinforce America’s democratic institutions. 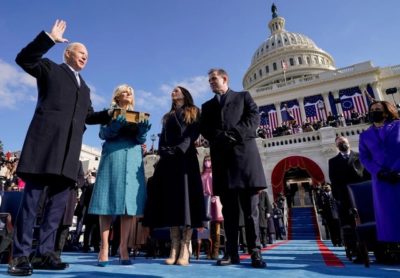 Biden taking the oath of office as our 46th President, Jan. 20, 2021. Photo courtesy of Time Magazine.

Biden in his inaugural address drew a direct line from the false claims of election fraud spouted by Trump supporters in their failed attempt to demand a victory they did not win. He pointedly said “Democracy has prevailed,” declaring that the task ahead is to “defend the truth and defeat the lies”.

The Biden Agenda for the first days of the Biden Presidency began the same afternoon. In a sign that the newly sworn-in president is shaking things up in Washington, Biden has promised to take a virtual blow torch to the policies of the past four years. To do that, he says requires a conscious choice that “Work can only begin when we heal our divisions.”

On his first afternoon in the Oval Office, he signed some 15 executive orders, including rejoining the Paris Climate Accord, orders to reunite the children separated from their parents at the border by former President Trump’s immigration ban, halted construction on the border wall, and signed a 100-day federal facemask order for all federal properties and interstate travel.

His greatest challenge; the rollout of the COVID-19 vaccines, which have lacked any discernible federal leadership. Biden has made it a presidential goal to get 100 million doses of the vaccine into the arms of Americans in the first 200 days of the administration.

Aides say he plans to reverse the immigration ban on some Muslim countries put in place in the early days of the Trump presidency, and will immediately put forward an outline for a new COVID-19 aid package to underlay the vaccination rollout, increase access to testing and personal protective equipment, and help businesses and families devastated by the pandemic.

Refreshingly, the message appears to be “someone is in charge,” which many see as a welcome change over the past four years; particularly this past year when the federal government appeared to be basically missing in action in any leadership role attempting to deal with the coronavirus pandemic, known as COVID-19

As Biden ended his speech he made a promise to America, asking his fellow leaders to join him to move the nation ahead and deal with our challenges, “So we can say that democracy did not die on our watch.”

Featured image: The United States Capitol at dawn on Inauguration Day, with thousands of flags marching up the National Mall in place of the crowds that, due to COVID-19, and extremists threats, could not stand in their place. Photo courtesy of New York Times.