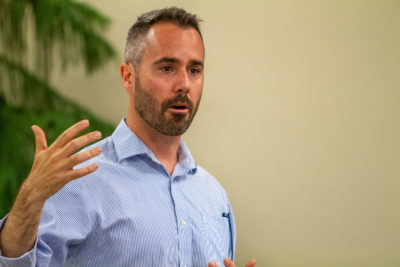 Dan Baer, one of several Democratic candidates for the U.S. Senate looking to unseat first-term Republican Senator Cory Gardner in 2020, made a campaign stop in Salida recently.

A native Coloradan, Baer was educated at Harvard and Oxford, and has had extensive prior experience with government in appointed positions. He served in the Obama administration as an ambassador to the OSCE (Organization for Security and Cooperation in Europe), where he worked on issues ranging from arms control to human rights. After being “fired by (President) Trump” in the wake of the 2016 election, he returned to Colorado and ran the Department of Higher Education under former governor Hickenlooper. “I wasn’t planning to be a politician,” Baer said, when asked why he was running for office, “but (this election) is crucially important.”

Baer entered the Senate race in April, and has been traveling the state since then, talking to voters, and even shadowing some of them on their jobs to get a better idea of their concerns. “I started in Yuma (Cory Gardner’s hometown) with a farmer and his son learning how tariffs are affecting them, and climate change as well. Then a teacher in Grand Junction. It is important to me to talk to everyone, since I am going to be representing everyone.”

Baer was blunt about the stakes in the upcoming election, calling the current administration “an existential threat to our democracy.”

“The 2018 election was encouraging,” he said. “A lot of people who historically didn’t vote did get out to vote in 2018. 18-29 year-olds in Colorado turned out 10 percent above average. We did the one thing we could – we didn’t give up, we organized, we voted and we won.”

Baer cites campaign finance reform as one of the issues most important to him. He advocates overturning the Citizens United decision, which essentially allows unlimited amounts of “dark money” to fund political campaigns, and a ban on former members of Congress from becoming lobbyists. “Corporate interests pay people on the way in and out of office,” Baer says, and the lobbying ban and campaign finance reform are necessary to “restore fairness” to the U.S. political system. 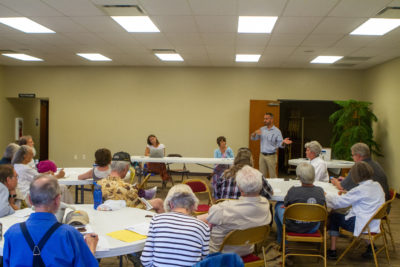 Climate change is another major issue: “If we don’t tackle climate change, nothing else matters.”

Noting that Colorado is “a state whose economy is directly tied to the environment,” Baer talked about the importance of transforming that economy to focus on renewable energy.

The goal for Democrats in the 2020 election, Baer said, even more than taking back the White House, would be to take back the Senate. He cited Senate Majority Leader Mitch McConnell as the single most significant impediment to political progress, saying that he had “undermined faith in the government to help the public.”

“If there’s a possibility of people becoming cynical and giving up, then Mitch McConnell wins – which is why I think this moment is so important. It’s crucial to elect people who know how to hold the executive [branch] accountable. It can’t be done without Colorado.”

Gardner is widely regarded as one of the most vulnerable Republican Senators up for election in 2020 and is, according to Baer, part of the problem in Washington. “His passive support (for the Majority Leader) is enabling McConnell and President Trump to damage our economy, our national security and our values. He serves Republican ideologues more than the people of Colorado.

“If we do take the White House but not the Senate, we can’t start to undo the damage.”