Buena Vista Trustees got an overview of a proposed Transitional Work Program at the Buena Vista Correctional Facility during their Tuesday, Aug. 13 regular meeting. The presentation by the Colorado Department of Corrections (DOC) dispelled many of the rumors floating in social media over the past few weeks. It laid out an overview of a boot camp workforce program and its purpose, as well as tight controls and community feedback avenues.

“We were in the process of planning this when [the social media rumors] started. The program is intended to reduce recidivism rates, to provide opportunities to get work skills prior to release,” said Buena Vista Correctional Facility Warden Jason Lengerich. “About 95 percent are going to get out, and when they do, they are going to be our neighbors. Our department runs around 50 percent recidivism. We think we can reduce that.” 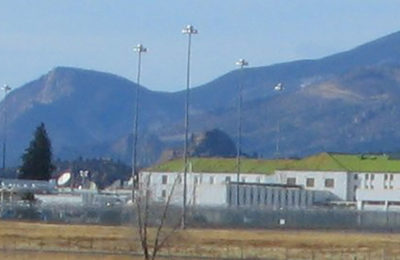 Lengerich explained that the boot camp program is not a new concept. The DOC had a transitional work program in boot camp facilities on the grounds at the Buena Vista Correctional Facility that he says worked well but was decommissioned in 2010. The program operated in 1961, and he said that during the 1930s it housed more than 200 youthful offenders working for farmers here.

“We want to use it for its intended purpose, housing six offenders who are within six to 10 months of release,” said Lengerich. “They’ll be nonviolent, not sex offenders and we’ll consider their work ethic – do they want to work … we hope to reduce [recidivism] by two percent over the next year – this will be tracked and measured.”

He explained that the initial six would do the updates to the building, upgrades to plumbing and code standards.

“Then, after the DOC gets that building up to code, we’d like to use those original six offenders to work on the ranch campus across the river. This will entail a partnership with correctional industries. Once we establish this piece, we’re looking at this as a Transitional Workforce Center – working with the EDC [Chaffee County Economic Development Corporation] to provide candidates for jobs that are hard to fill.”

Lengerich said that the program is not asking employers to pay half wage. “Instead the goal is to get these offenders set and get some financial underpinnings and get a work skill which will make it a lot easier for them to get a job in Denver or the Springs. [With work experience] they might then have an employer who could provide a letter of recommendation – there are lots of benefits in that.”

EDC Executive Director Wendell Pryor attended the meeting to support the concept. “I want to clarify our role and reinforce that we have a workforce crisis and a housing crisis followed by a childcare crisis in this county. Last year we grew three percent, before that two percent – we are generally in favor of this program and in favor of hiring employees if they show up for work.

“We support this approach to build a workforce,” added Pryor. “We serve in a brokering role, and talking with employers, not one employer has balked at the idea. We have a company out of the Front Range relocating here next spring – he said ‘I’m all about that’ when I told him about this program. We’ll support the transportation needs.”

The Boot Camp operational structure will have control mechanisms. According to Lengerich, who brought along several members of the management team setting up the program.  It will function as a transitional workforce center, which will follow a curriculum designed to teach them how to live independently after a highly structured group living within the prison.

There will be a tight vetting process. The DOC will work with law enforcement who will be informed about the participants and what jobs they are doing. Some of them might have ankle monitoring, and GPS will be used, so the DOC knows where they are and where they have been. They will be paid, and they will pay taxes.

During the Q&A period, trustees asked a few questions, all of which were answered. The dairy will not be opened again. The original boot camp housed 100 in a bunk dorm setup, but the renovations will create a more normal environment where the work release candidates will have their own spaces. Because in the first few weeks the participants won’t yet have paychecks, they’ll be provided with lunches, staff will drive them to work, and they will check-in and out of boot camp. There have been conversations regarding the Chaffee Shuttle, but no decisions.

Lengerich reassured the trustees that while the DOC staffing has been an issue for the past few years, that they have been able to reduce the vacancies and have several trainees in the training academy. He said the facility now has fewer than 15 full-time officer positions open and it has created part-time flex positions that allow more flexibility in facility management. “We want to ID the guys who don’t want to be involved in those things that require heavy supervision. This is a different concept. Instead of ‘do this, do that,’ it’s – ‘let me show you how to do this.’”

Trustees acknowledged the county’s workforce needs and appeared supportive of the concept.

“This sounds like a really good program for helping offenders reintegrate into our society,” said Trustee Libby Fay.

“It will be unique to us here, even if it’s being done in other areas – it’s a great transitional step,” said Mayor Duff Lacy.

“Chief Tidwell and I toured this last week,” said Town Administrator Phillip Puckett. “ I took away they are going to include us as they finalize the process. If it does end up going into a transitional work program, they have offered to include us in the selection of the offenders who go into the program.”

The DOC has an aggressive time frame it wants to begin (around the beginning of September)  to get the boot camp renovated. “They’re getting out, they are going to be our neighbors – we would much rather produce good neighbors,” said Lengerich.