All might seem calm on the surface of things right now but according to the Department of Homeland Security (DHS), beneath the surface, bigotry, hatred, and violence are brewing.

Earlier this week, the Department of Homeland Security in a terrorism advisory bulletin, raised concerns about potential threats to the LGBTQ, Jewish and migrant communities from violent extremists inside the United States. While they also said that such violence was “isolated,” DHS pointed out that they have “observed general calls for violence targeting elected officials, candidates and drop box locations,” prior to and during the recent election and they specifically mentioned the attack on House Speaker Nancy Pelosi’s husband. 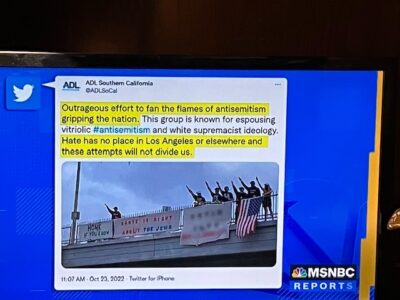 “Americans motivated by violent ideologies pose a persistent and lethal threat,” a senior DHS official said in a briefing about the new Terrorism Advisory System bulletin.

The DHS bulletin issued on Wednesday, was only the latest warning about the domestic nature of national terrorism threats, updated about every six months since the insurrection at the U.S. Capitol on Jan. 6, 2021. It pointed out that some extremists have been inspired by several recent attacks; the recent mass shooting at Club Q in Colorado Springs being one such incident.

While the Jewish community has long been a target of antisemitic violence, more recent popular targets of the extreme right have been the LGBTQ community and migrant populations.

During the DHS press briefing, asked if recent antisemitic remarks by the rapper formerly known as Kanye West (who now calls himself Ye) had made the situation more volatile, a senior DHS official said any high-profile official or celebrity spouting conspiracy theories only serves to ignite violence among extremists.

“Certainly the Jewish community seems particularly targeted in recent days by that kind of activity in our discourse,” said the official.

The new DHS bulletin did list “potential changes in border enforcement policy, an increase in noncitizens attempting to enter the U.S. or other immigration-related developments” as actions that may heighten calls for violence. DHS is preparing to lift COVID restrictions known as Title 42 on Dec. 21, to be in compliance with a court order, which will allow many more migrants into the U.S. to claim asylum.

A fact that underlies the current threat level is that the intelligence community has spent more than two decades focused on threats coming from outside the U.S. and it has ben slow to recognize the domestic extremism threats that appear to be growing, or at least agitating.