An incident on March 25, 2016, appears to have resulted in a young man being unjustifiably beaten and tasered by law enforcement officers after committing a crime. But according to witness statements,  it would appear the actual crime did not justify the force.

That day, a troubled young man walked through the Chaffee County Sheriff’s Department parking lot and began breaking police car windows. It was a bright and sunny spring day by all accounts. The young man had just left the Chaffee County Probation Department and was surprised when no one came to arrest him after he broke the first window. All he wanted, he said, was to go to back to jail. So he broke two more windows and when still no police arrived to arrest him, the young man decided to go across town and meet up with some friends. 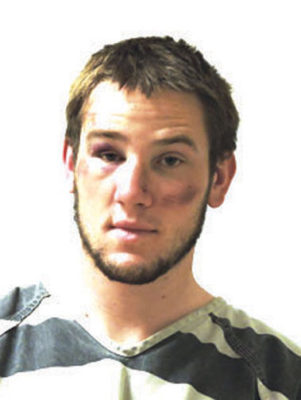 Photo of Dillon Kimberlin, taken days after his arrest following the incident involving both the Chaffee County Sheriff’s office and the Salida Police Dept.

The young man’s name is Dillon Kimberlin. According to those who know him well, he is a very bright and kind person. But like so many of his friends Kimberlin, a user primarily of meth-amphetamines, had a drug problem. He was there that day to ask his probation officer to put him back in jail because he wanted to get sober. According to Kimberlin the only way he knew he could get sober, at the time, was to go back to jail. He recalls the probation officer told him she could not put him back in jail without a reason, but he believed in his stubborn and conflicted mind that this was the only way. As a result, he left the probation office and made the decision to break out the windows and ensure his return to jail.

After breaking the windows, he walked across town to meet his friends at a computer repair business on Highway 50 between F and G Streets called Comp-U-Tech. It took him approximately one hour to walk across town because he made some stops along the way. During that time Salida Police and Chaffee County Sheriff’s Deputies discovered the broken windows and began investigating the crime.

By the time Kimberlin arrived at Comp-U-Tech, the police had identified him as the person who had broken the windows and began searching for him. According to witnesses interviewed by Ark Valley staff and police reports, police arrived at Comp-U-Tech within five to 10 minutes after Kimberlin’s arrival. Witnesses and police reports also confirm that around 10 officers and deputies arrived within minutes of one another. Among the first officers to arrive — the Salida Police Chief Terry Clark and Chaffee County Sheriff John Spezze.

Arrest and search affidavits obtained by Ark Valley Voice staff say the police were given permission to enter the business and look for Kimberlin. According to the affidavits, three officers entered the front of the business, including Spezze. Clark and another officer positioned themselves outside the back door of the business.

Kimberlin says he remembers those first moments very well. He told the others with him in the back room of the business, “they’re [the police] here for me,” and sank to his knees. “I wanted to go back to jail, anyways,” he told the people he was with.

The first officer entered the room with his service weapon drawn.

“I remembered what happened to Ted… [and] I didn’t want to die,” said Kimberlin, describing his response to seeing the weapon pointed at him and remembering when Theodore Dennis Vanosdall, 36 was killed in a shootout at 1220 H St. in 2013. He says he wanted to comply with the officer’s commands and remembers lying down on the floor, then being struck in the head. At that point things became fuzzy and he felt a taser on the back of his leg. He recalls officers’ commands to stop resisting. He says he kept repeating, “I’m not resisting!” and doing all that he could to comply with their commands.

Kimberlin says he barely remembers being handcuffed and led out of the front of the business. He does remember blood gushing from his nose and his eye swelling as he sat on a parking curb. Salida Emergency Medical Services arrived a short time later and Kimberlin informed them that he believed his nose was broken. But the arrest affidavit states that he was “medically cleared” and transported to the jail.

Kimberlin says he remembers telling jail staff that his face and nose hurt badly and he believed his nose was broken. According to medical records, it was not until March 29, four days after his arrest, that he was taken to Heart of the Rockies Regional Medical Center (HRRMC). Doctor’s notes on the records indicate Kimberlin had suffered a broken nose that had to be reset due to the amount of time since the original injury.

Given Kimberlin’s story and claims, four non-law enforcement witnesses were independently interviewed by Ark Valley staff. Each witness’ account was consistent, in that they were surprised by the overwhelming response by the police. The witness accounts universally agreed they saw no aggressive acts or provocative words from Kimberlin toward the police. In fact, two of the witnesses observed Kimberlin obeying the officer commands and moving to the floor when officers grabbed him.

Two of the witnesses recall officers telling Kimberlin to stop resisting as they grabbed him. These two witnesses also remember him saying, “I’m not resisting,” during the arrest. Those that were in the room with the officers were told to leave shortly after Kimberlin was on the floor. None of the witnesses saw a taser being deployed.

Prior to being told to leave, one witness, who had not met Kimberlin prior to that day, recalls one officer’s actions in particular. Specifically, the witness said she was disturbed by how that officer forced his face into the floor several times and struck his head and face with his knee in a horizontal striking motion several times.

Ark Valley Voice staff obtained both the warrant-less arrest affidavit and a subsequent search warrant affidavit with supplemental police reports resulting from drugs being found in the business. The police reports differ from witness accounts. Some differences in accounts are to be expected. However, the timing and degree of differences are significant in this case.

Both of the affidavits only slightly differ from witness accounts up to the time police enter the room where Kimberlin was located. At that point, the arrest warrant says he did not move when the officers gave him commands to get on the ground and that Kimberlin “smiled” at one of the officers as he gave commands to him. The affidavit says one officer initially grabbed Dillon and started to bring him to the ground. The arrest affidavit says two other officers, including Spezze, quickly “assisted” the first officer in controlling Kimberlin.

The affidavit details the following actions during the arrest: “As soon as we went hands-on with Kimberlin he started fighting with us… [Dillon] tucked his arms underneath his body and was trying to get away from the officers… [Dillon] was kicking at us and trying to get up off the ground.”

The affidavit further reports, Kimberlin’s actions were such that one officer had to deploy and cycle his taser three times (each cycle is five seconds) in what is called a “drive stun” mode before Kimberlin stopped struggling with the officers. That affidavit does not describe any actions by Kimberlin or other officers that may have led to or caused the injuries he actually sustained. Other than the arrest affidavit mentioning officers observed Kimberlin was bleeding from the nose when they stood him up, no other police report explains how he received the injuries he was later treated for at HRRMC.

Sheriff Spezze and Salida Chief of Police Russ Johnson were asked for their comments for this article. “I don’t exactly recall. Remember, all the reports were filed by the officers that were there,” said Spezze.

“I was not on the scene that day until we got a search warrant to do the search for drugs,” said Salida Chief of Police Russ Johnson. “It was a known drug business, I got called in as the extra to search the business and we recovered a lot of drugs and drug paraphernalia. If excessive force was used, why wouldn’t the DA’s office investigate it?