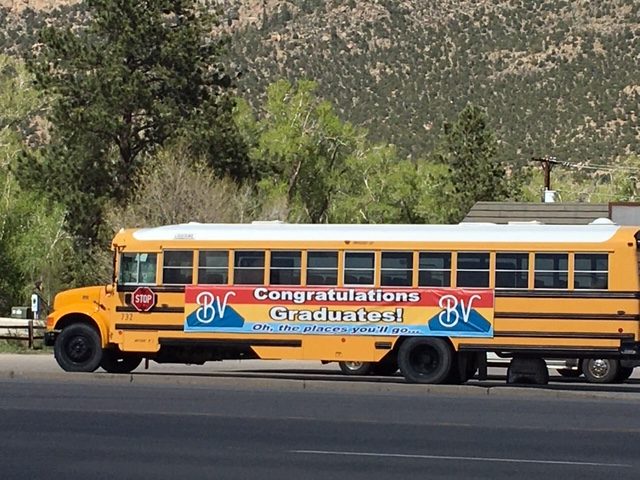 The year 2020 will surely live in the collective memories of the world’s population as the year everything changed due to the coronavirus known as COVID-19. But for the 54 2020 graduates of Buena Vista High School, it might well be remembered as the most memorable graduation of all time.

This year, graduation, scheduled for Saturday, May 23, will involve an evening parade down Main Street to the Comanche Drive-in Theater on the edge of town. The drive-in is one of only eight drive-ins left operating in the entire state of Colorado, and one of only 330 left across the U.S.

While the exact details are still being finalized, Buena Vista High School Principal Kevin Denton assures the community that the intent is to honor the students, who have worked so hard and so long to reach this graduation day. 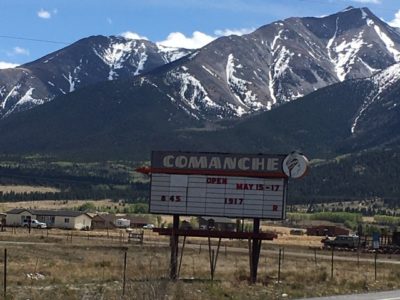 The Comache Drive-in Movie Theater, on CR 306 on the western edge of Buena Vista, has an unparalleled natural setting. Photo by Jan Wondra,

The “totally special graduation” will begin from the parking lot of Avery Parsons Elementary School on Main Street, with students and their families, organized in what the school estimates will be at least 115 cars. With a police escort, the cars will parade down Main, going west at a sedate 10 m.p.h.

The Colorado State Patrol will block off U.S. 24 during the event, so the parade can continue west on County Road 306. Community members will get the chance to cheer the graduates on toward the Comanche Drive-in Theater, where graduation ceremonies are scheduled to begin at 8:30 p.m.

“We’ve planned all this as a way to allow them to participate in a real graduation ceremony, even though we can’t be in the traditional setting,” said Denton.

Graduation this year was already going to be different, as the construction of new middle and high school buildings, including the gymnasium, is underway. The original plan was that graduation would be held on the school baseball field. “But no one dreamed at the start of this past school year what would transpire by late winter,” said Denton. “A global pandemic gets your attention.”

The logistics of the parade are being carefully planned.

“We have 54 graduates, and they are allowed to have two vehicles each in the parade. They’ll go in pairs; the graduate will lead followed by another car for the family. We’re encouraging them to decorate their cars,” said Denton. “Since people won’t see their graduation cap, we’re making some giant tassels to affix to the top of the cars with magnets. People will know which cars are graduates.”

Denton says that those community members intending to just watch the parade should spread out along Main Street (social distancing with six feet separation does apply between family groups).

“Those intending to ‘drive-in’ to the graduation should plan to be on the west side of U.S. 24 by 7:45 p.m. when the parade begins. You can watch from your cars, or properly socially-distance along the road,” said Denton (who suggested that parallel parking on Main Street west of U.S. 24 would be a better parking option.). “We’ll proceed out to the drive-in, where we’ll have traffic directors to show people where to park.” 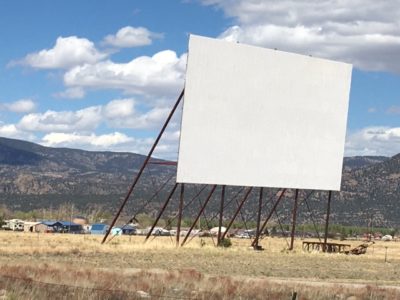 The Comanche Drive-in, on CR 306 on the western edge of Buena Vista has been run by the same family since 1966. Photo by Jan Wondra

The teachers and the school board will be in the first three rows. In the fourth row area, a high stage will be set up and projected onto the big screen. Rows of the student’s cars, then all the families in their cars, with other community bystanders, all in their cars, will fill in the rows behind them.

“We’ve got to meet social distancing requirements. We’ve planned trucks to come to get the students a few at a time to take them to the stage where they can pick up their diplomas, and get photos taken,” said Denton. “There won’t be any handing out– they’ll have to pick them up themselves. Then they’ll hop back in their cars.”

Planning for the graduation says Denton, has involved the cooperation of a lot of school staff and many in the community who have pitched in to make the graduation happen.

“I guess you could say I’m the [ceremony] director, and we have the production crew from Clear View Church for cameras and sound and spotlights,” said Denton. “Colorado Central Telecom has gone out and set up an entire Internet setup that should ensure that we have the upload speeds we need to broadcast this event out on Youtube live.”

Denton added that Alpine Lumber is bringing four lumber trucks to transport the graduates three at a time, back and forth from the cars to the stage. Barb and John Groy, whose family have owned the Comanche Drive-in since 1966, have been gracious hosts of the planning. “The drive-in has a capacity of 200, and they say they’ve never actually filled it up before. We think we’re going to be close on graduation night.”

Denton says that he considers this outpouring from the community so typical of Buena Vista. “It’s a testimony to the unique community we live in and the ethic of excellence and quality the school district has.”

“They’re going to remember this graduation,” added Denton. “You hope this is the only time we have to do it this way, but we wonder if this won’t be something that people want to do again.”