Drought and snowpack: recent cold and snow are just what April needs

Nobody dares to complain too loudly about the cold snap and the past week of snow because there will always, always be that someone with the snappy comeback about us really, really needing the moisture hereabouts. 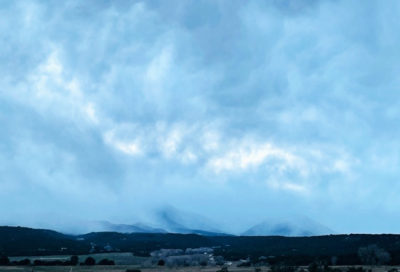 The truth is, cold and wet weather this time of year can buy some time for the snowpack, which began to recede earlier this month as the weather warmed. That’s fairly normal, albeit a tad on the early side. The question is, how fast it will melt off and how much of that mountain water will go where we need it most?

The easy answer, perhaps another snappy comeback, is that nobody knows for certain at this point. But after a 2020 that saw record wildfires in the state, a no-show for the mountain monsoons, this year parched soils will almost certainly suck up runoff as it travels toward waterways. In a best-case scenario, Chaffee County needs a cool spring, regular precipitation and not a lot of wind.

If it’s warm, dry, sunny, and windy, as was the case in early April, that’s another situation. “When you put all four of those together, that’s when you’re really losing snow,” said Chaffee County Commissioner Greg Felt. He’s a longtime river outfitter who sits on numerous water-related commissions, including the Colorado Water Conservation Board, and was recently appointed to the board of directors for the Southeastern Colorado Water Conservation District.

Felt said Chaffee County is looking relatively good in terms of municipal water supplies and assets coming into the Arkansas River for the summer season. That includes the significant supply from the Fry-Ark Project, which imports an average of 58,000 acre feet from the headwaters of the Fryingpan River to the Arkansas Basin.  Waters from Fry-Ark get used for agriculture, well augmentation, and municipalities, as well as fisheries and meeting recreation goals in the Arkansas River Voluntary Flow Management Program.  That program aims to keep minimum boating flows of 700 cubic feet per second(cfs) at the Wellsville Gauge each year between July 1 and Aug. 15.

But as in many recent years, there remains the question about the agricultural water that relies heavily on mountain snows that melt and channel into the ditch networks across the county. In dry years the ditches with the most junior water rights may run for just a few days or fail to run altogether.

Snowpack doesn’t guarantee stream flow, according to Felt. There’s the matter of soil condition and how much water it draws, as well as sublimation, where the snow is lost into warm, windy air.

So the past week’s cold and wet weather has been a blessing in that regard. As of April 1, the mountain snow and its moisture content were looking good on paper, according to the 115 SNOTEL (snow telemetry) measuring sites in Colorado that are set up in remote areas and run by USDA’s Natural Resources Conservation Service. From that point, the snowpack waned with the warm weather, then waxed a bit with the recent precipitation.

The Arkansas River Basin snowpack on April 1 was measuring at 105 percent of median, and to our south, the Upper Rio Grande was at 110 percent. To the west, the Gunnison River Basin lags at 89 percent of normal and has yet to stage a comeback.

The Front Range was certainly feeling less wrung-out after the record snowstorms in mid-March. The month came in as the second wettest March since 1872 and it toned down the U.S. Drought Monitor’s sea of red that depicted extreme drought in eastern Colorado. At the beginning of March, 99 percent of Colorado was in moderate drought or worse, with 56 percent in the extreme category.

As of April 15, however, 92 percent of Colorado remained in a moderate drought, and the extreme drought areas had scaled back to 32 percent. So the precipitation helped. The Drought Monitor is updated on Thursdays, so it’s too soon to say if the recent snow in the high country has changed the hot colors on the map.

It does appear that the precipitation and cold weather have boosted the snowpack for now. In the Arkansas River Basin, for example, snowpack was measuring at 77 percent of median on April 13, but was up to 85 percent April 20.

That’s a snapshot for the moment. Colorado – particularly the Western Slope – is seeing a 20-year dry trend, according to state climatologist Russ Schumacher. “We have periods of precipitation, but it’s getting hotter and thirstier,” he said. “If we look at the Southwest U.S. as a whole, it really goes back to 2000 that we’ve been in a dry period.”

He also noted that the western Colorado’s summer rain pattern, which typically begins in July with daily afternoon rains, has been off, if not gone, over the last three years. “The last three monsoons have been pretty much a failure on the Western Slope,” he said.

Schumacher said the drought on the Western Slope remains “very serious, given everything we saw last year… everything melted out really early and then it just stayed dry for the summer.”

He said this season’s snows have been neither terrible nor great, “but given how bad things were, what we really needed was way above average.” That said, he noted that the Arkansas River Basin has been “one of the brighter spots in the state.”

He said the warm, dry, and windy weather in early April put the snowmelt about 10 days ahead of normal, but that the recent cold snap in the mountains has the potential to slow things down.

“That’s exactly what we need in the spring,” he said.