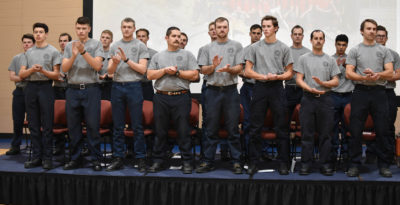 In his address, Bauer asked for a moment of silence and then spoke of the death of Summit Fire & EMS firefighter Ken Jones, who died fighting a fire at Copper Mountain early that same morning. Bauer told the new firefighters that serving others was central to firefighter Jones’ life, and he congratulated the graduates for their choice to serve others as well.

As part of the ceremony, Chief Dailey awarded Instructor of the Year to Ryan Gregor. Both Cadet of the Year and Academic Excellence awards went to graduate Zachary Cherry, and Jonathan Burnham received the Certificate of Perseverance.