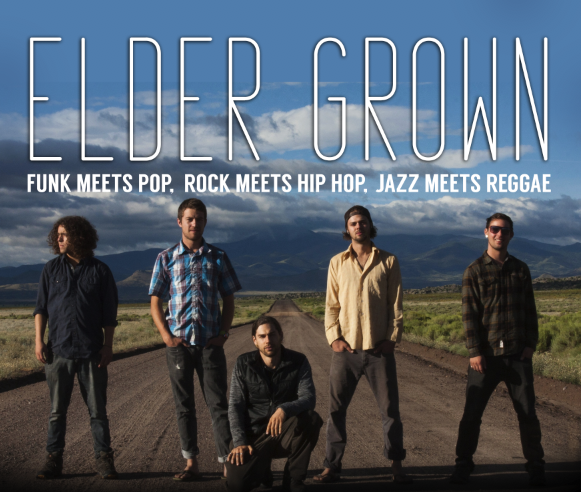 Durango, CO-based improvisational impresarios Elder Grown will be bringing their distinct brand of funk fusion to The Lariat January 25. The show will start at 9:00 p.m., tickets are $10 and can be bought in advance or at the door.

Formed by the brothers Josh, John, and Paul Hoffman, Elder Grown is a family band from top to bottom. The band name was inspired after the Hoffman family’s matriarch, Marion Elder, who instilled a sense of loving service through music and was a driving force in inspiring the brothers to pursue music.

All multi-instrumentalists, the Hoffman Brothers continue to wow audiences with their fluid musicianship, often switching instruments with each other in the middle of a song. Exploring everything from hip-hop and rap, to funk and reggae, Elder Grown takes audiences on a “genre-bending rollercoaster” full of enlightened improvisation, according to the band’s official website.

Through the encouragement of their musician father, the Hoffman brothers quickly began exploring their own individual potentials for musicianship, as well as songwriting. Almost immediately, the Hoffman brothers began to develop their own system for producing songs. One brother would write a song, and the others would learn accompanying instruments to complete the artistic vision. Before long, they had all the trappings of a progressive funk improvisational roots jam band.

Through a chance encounter, the Hoffman brothers met saxophonist/singer/songwriter Sam Kelly and Elder Grown’s sound was forever changed. Inspired by his mother’s smooth jazz records, Kelly discovered the saxophone in elementary school and immediately fell in love with it. After his father taught him to play guitar in high school, Kelly began devoting himself to the pursuit of music.  Kelly soon graduated from Fort Lewis College with a Music Business degree specializing in Jazz Performance and Marketing, bringing an entirely new and funky breath of fresh air to Elder Grown, according to the band’s official website.

The final addition to the Hoffman Brothers’ family band was guitarist/bassist/keyboardist Brandon Clark. Although not a member of the Hoffman family, Clark’s skilled songwriting and appreciation of Americana roots quickly earned him a spot at the band’s table. Nicknamed “Branch”, Clark adds yet another layer of creativity to the songwriting-heavy ensemble.

Elder Grown’s unique musical brand has been inspiring audiences across the state of Colorado for many road-worn years as the band continues to push the creative envelope with every performance. From switching instruments mid-show to sensational songwriting, Elder Grown is a funky roots-inspired band dedicated to taking audiences on a “journey into the unrecognizable familiar”, according to the band’s official website.