Meet Erin Kelley and you’re struck by her direct gaze and thoughtful answers. A Colorado native born at Fitzsimons Army Medical Center in Aurora, she speaks with confidence that some might say is beyond her years. Those who know her say not to let her youthful appearance fool you; she’s all business and she has a stance on issues that is grounded in years of experience in the legislative arena. 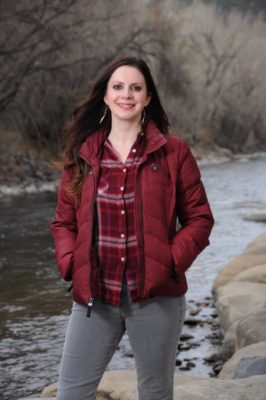 “I’m not a neophyte; no lawmaker actually says, ‘Hey, I wrote this bill’ … Anyone who tells you when they go into office they have a bill written – not true. Legislators sitting down to write a bill – unless they’re a master on state codes – have to take in information from many sources to craft a good bill.”

Before she gets to bill-crafting, Kelley, a Democrat, has to get elected. Her themes, she says, should come as no surprise. “I want to fight for access to health care. Places like Park County don’t have a single clinic or pharmacy. That is not acceptable. I also want to carry a strong voice to the Capitol about protection of our public lands, especially from size reduction, which threatens precious areas.

“Living wage jobs are critical, especially here. That’s true for teachers too – we’re behind on funding education. People want to live here in this community with their neighbors. They want to raise their children in a place with a beautiful landscape and all the biking, rafting, hiking and climbing available here,” said Kelley. “But affordable housing is a huge issue, especially in Chaffee County. We need to continue to look at private partnerships – developers willing to negotiate some spaces for those making 40 to 80 percent of the average median income.”

Kelley comes by her discipline and drive naturally. Both her parents served in the Air Force. Her father enlisted during the Vietnam War, and her mother retired as an Air Force colonel then earned a Ph.D. in educational psychology. With that background, Kelley says her educational bent came naturally. She earned a bachelor’s degree in political science at Arizona State University and moved to Florida, deciding initially to pursue a master’s at the University of Central Florida.

“I began in public administration, but then I gravitated into criminal justice for my master’s degree,” said Kelley. “As an empathetic person, I got curious about what makes people do good or bad things with their impulses. Criminals aren’t always people who choose to do the wrong thing, sometimes things happen to them.”

Asked about her perspective, Kelley said, “As a female, I try and look at someone’s background and use it to see what their motivation is. Instead of judging people, it can be good to try to understand them. It’s more productive for society. Our goals should be to rehabilitate as many offenders as possible so they can reach probation with the possibility of becoming productive members of society. So many people are hurt in our society through that time in early childhood.”

While in her 20s, Kelley applied to the Florida State House, driving hours to Tallahassee where she impressed the legislative representative interviewing her who pointed out she was probably over-qualified for the job. “ I took a job below my skill set and education level because I think often it’s advantageous to start at a lower-level position – learn as much as you can and take time to understand the issues. Then you have a stronger background to rise in the organization. I was there five and a half years and left as a senior legislative analyst. You really get to know how state government works that way.”

After those years, Kelley said she longed to be back west, and moved to Phoenix, where she had family. She took a job at an international shipping firm specializing in refrigerated cargo, first as a sales representative then an account manager. “Talk about just-in-time delivery – when you work in a service industry with perishable goods, you really understand how things have to move.”

With a background in government, legislature and the private market, Kelley moved to Salida and back into government working for the Salida Fire Department and the South Arkansas Fire District. The choice was deliberate. “Government work is much more fulfilling to me. When I was in international shipping, I would wake up and say, ‘I guess I’m helping the global economy.’ In government, I know I’m helping citizens, and I want to help them stay informed and have better lives.

“There is great value in being involved in local community and organizations that care about the most vulnerable in society. Moving forward into a new role, I’m of the age group where all my friends are having children – I see the struggles of working families. I’m fearful the American dream isn’t there for my generation and future generations. I see parents working long hours and multiple jobs, without savings, with no good childcare options. I know we can change that. All of what government should be is part of social fabric.”

Her plan if elected, said Kelley, is to reach out proactively to Sen. Kerry Donovan and stakeholder groups to understand what they believe needs to be addressed in the coming year. Those entities include sheriff’s offices, public safety organizations and local businesses.

“Part of working with people is building relationships here and in Denver, and with state senators and neighboring legislators to work on issues together, like the critical broadband and cell service issues across District 60 counties. Agriculture has influence here. Of course, there are lobbyists – but in District 60 we’re probably fortunate that the oil and gas lobby isn’t interested in our area. I’m in favor of (proposition) 110 for transportation. I believe while your economy is booming, just like in private life, if you want something, you have to pay for it.”

Asked what she wants people to know about her, Kelley’s answer reflects her focus. “I truly believe in the dream of democracy. I will work across the aisle with anyone who wants to help my district,” said Kelley. “For me, the best job in the world is to be blessed to be able to represent my community. I can tell you, having worked at the legislative level, every day you walk into the capitol building there is a reset – you feel the importance of what can be done there. Being a representative is not about me, my future, or my ego – it’s about representing the people and my district, and finding solutions.”