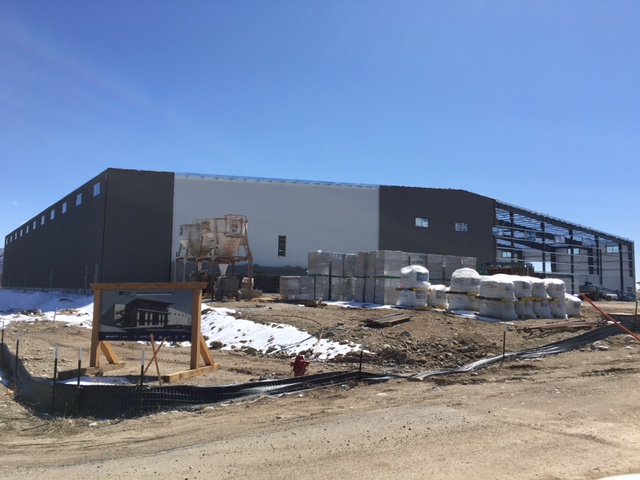 A 110,000 square foot state-of-the-art housing manufacturing facility is under construction on the south edge of Buena Vista that when complete will provide 100 skilled construction and production jobs in Chaffee County and may produce up to 700 homes each year. The climate-controlled site is scheduled to begin production around Nov. 1 of this year. This is hardly the first project for Fading West in Chaffee County, rather it is just the next generation of the firm’s commitment to this county.

That Fading West housing construction capability is needed in this county, and in Central Colorado for that matter, is not a subject of debate. The county and this region are in critical need of workforce housing. A recent Ark Valley Voice story on the rapid pace of home sales in this county only underscores the need.

Back in 2017, Fading West was the driving force for The Farm; when fully built out, the 218 unit attainable housing project in Buena Vista will exemplify a simple goal; to make housing affordable enough for Chaffee County’s workforce; meaning teachers, firefighters, law enforcement, and shop owners and workers might be able to own their own homes; people who could afford housing at about 80 percent of the average median income (AMI). 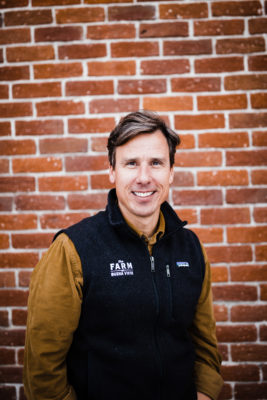 Charlie Chupp, the CEO of Fading West and the developer behind The Farm phased development, is building a home manufacturing plant on the edge of Buena Vista. Photo by Henry DeKam.

Those modular homes were being built in two other factories in Nebraska, meaning all elements had to be transported here, something that the CEO of Fading West Development Charlie Chupp, has set out to change.

His prior 20-year career in manufacturing in Florida meant he looked at the need for affordable housing in mountain communities in a different way than most. “Our mission is to create attainable housing. We had The Farm already. We created it as affordable enough for the community’s workforce. We love being part of Chaffee County and bringing jobs here. We want to replicate The Farm in other Rocky Mountain communities.”

Chupp says the site of their new manufacturing facility in Chaffee County is ideally located.”We are actually centrally located throughout the state. Our targets are the mountain towns,” he added. “About half our product will go to our own developments, focused on attainable price points, and half our output will go to other developers who need our product.”

Chupp admits that initially, he didn’t understand the nature of the county’s housing crisis.  “I stumbled into this housing crisis, and I started to think about how do you apply a manufacturing mindset to the construction problem? More importantly, how to do this to help people making 80 percent AMI (Average Median Income) be able to afford a home?”

The Impetus for a Chaffee County-based Manufacturing Site

Initially, says Chupp, he planned and built The Farm, a 21-acre, 218 home, pocket-park community just south of Buena Vista’s East Main area. “Back then, we had to leverage offsite construction – it’s too expensive to build on-site. We began with our own designs, building in Nebraska and shipping them the 500 miles to Chaffee County. We put up our first house at The Farm in Jan. 2018. The Farm Phase I is sold out and we are already half sold out half the 51 unit Phase II.”

That progress inspired Chupp to take the next (some might say) drastic step. “Seeing this massive need, we decided to build our own factory here [with Fading West as the parent company and Fading West Building Systems as a product division]. We stumbled through these phases of trying to figure the construction cost efficiencies to help us keep cost controls.”

With a background in manufacturing, Chupp had studied the Toyota production system, considered the most efficient in the world. “Their process eliminates waste while maximizing the value to the end customer,” he explains. “They have this philosophy and they teach it. We studied them in my old company and the process is called LEAN. Basically, you apply an efficient process to building homes, look at where the waste is, and eliminate it.”

He comments that a recent McKinsey & Company Report calls what he is creating “the Next Normal in Construction,” and confidently addresses those who may question the quality of Fading West homes. “Our housing meets all the international building codes. We go through the exact same codes and inspections as site-built homes and we are certified by the state.”

He admits that some might not understand the difference between manufacturing parts of a home in a climate-controlled environment versus a stick-built, site-built home, but there are great advantages. “When you go into product development versus site-built design, we are basically applying all our manufacturing engineering to the process and optimizing of raw materials. For instance, take a 4′ x 8′ sheet, I can set up and plan and cut it without waste in the manufacturing facility.”

The advantage, says Chupp, is obvious. “It allows us to invest in equipment and materials … we can load a whole week’s work of demand into a software program that tells us how to optimize every two by four. It cuts. It labels. It consolidates production into one location. Frankly, these processes are used all over the world in manufacturing.”

Beneath the Fading West name are divisions: their Fading West Construction Division, takes the units out of the factory and puts them on site. The Fading West Development Services division “goes out and finds land to do more of this.”

Chupp says the company’s mission is directly linked to the Fading West production advantage. “There is nobody else in the state building a product like this and our mission is to create attainable housing.”

The Focus on ‘Community’ Builds Success

When Chupp first came to town, it wasn’t to build houses, it was to work at Trails West. He says the name Fading West came from the name of an album from his favorite California-based band.

“I was basically working out of a storage room at Trails West and my assistant sat in a hallway. When we started The Farm people said, ‘Hey could you replicate this in our community over in Gunnison?’ and I started to think this could be a reputable thing.”

The factory employs 65 or so associates, 45 of them in end-production such as framers, machine operators, and inventory/materials control. That doesn’t include the construction crews, or the front office, engineering, project management, architecture, and design.

“These are great jobs,” says Chupp.  “We’re paying a good rate, full benefits, and profit-sharing. The entire semi-automated facility is designed to be one of the nicest manufacturing plants in the state when we open up, and that’s according to consultants from the modular industry and Toyota.”

The success of what Chupp envisioned, is now apparent. “We counted: we’ve got 78 homes lived in now and 85 percent are primary residents! They aren’t second-home communities. Our mission is for locals living in their communities … to create high-quality, architecturally interesting communities attainable by the local workforce in the Rocky Mountain West. We think about those things a LOT. We don’t do ugly.”

We don’t allow rentals under three months and we won’t sell a townhome to a nonresident,” adds Chupp who says that Chaffee Housing Trust is doing 25 to 30 percent of their affordable units. “We design not just housing, but we use land planning to create neighborhood communities where the workforce can live in their towns.”

“Being here is what made me realize what’s important. I moved here to be part of the community, I have no interest in the Front Range,” adds Chupp.

Chaffee County can be glad of that.

Featured image: The Fading West Home Manufacturing plant is under construction just northwest of the Central Colorado Regional Airport in Buena Vista. Photo by Jan Wondra. Fading West Development has announced that it is looking to work with landowners and developers around the Mountain West who are interested in helping solve their communities’ housing needs. Email info@fadingwestllc.com or call 719- 398-3080 for information.