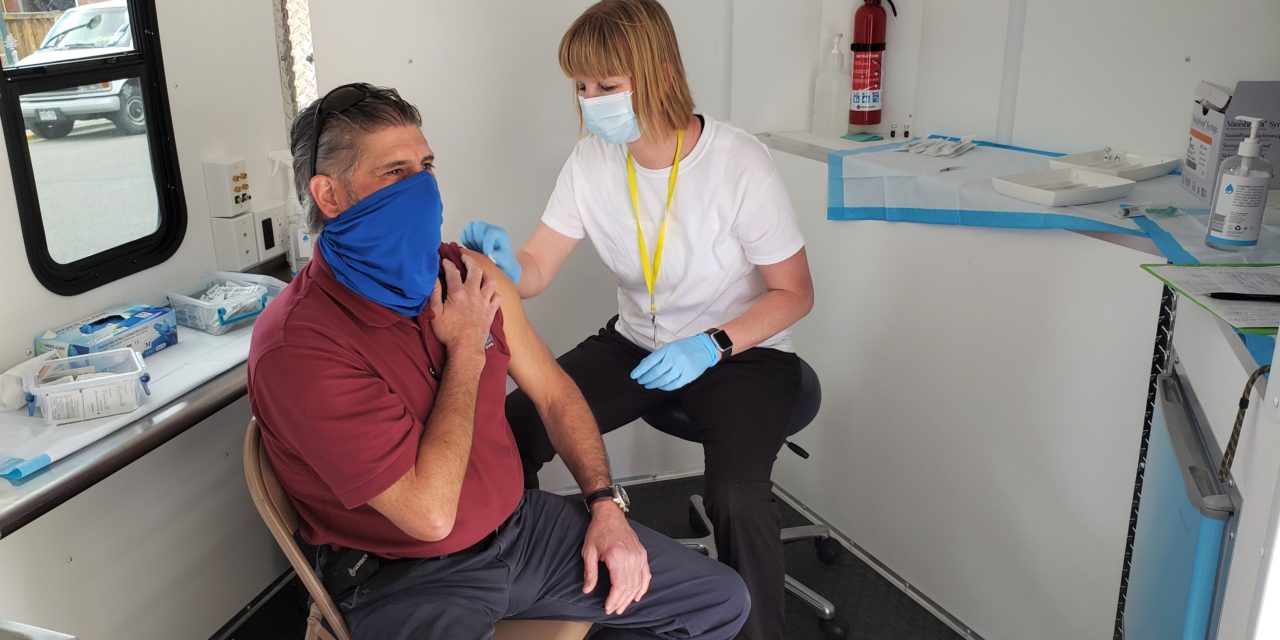 Alright, it’s getting a bit nutty out there.  False claims that COVID-19 vaccines contain microchips or are magnetically-charged continue to circulate on social media. The claims are now creeping into offline political discourse.

When conspiracy theorists and anti-vaxxers get up in front of state legislatures, as happened in Ohio the other day, and attempt to balance teaspoons on their foreheads, it’s time for those who live in a fact-based world to point out that we’ve officially arrived at “Looney Toons”. 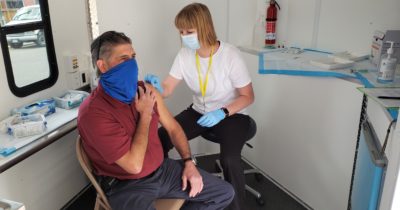 John Wyles receives his “one and done” J&J vaccination from CCPH nurse Tanya Wait in the new County Public Health trailer at Riverside Park in Salida during a music event. Merrell Bergin photo

The latest example came from Sherri Tenpenny, among the most notorious anti-vaccine influencers on social media. Testifying at an Ohio legislative hearing, Tenpenny, who has profited from conspiracy theories and who once described COVID-19 vaccines as “a perfect killing machine,” told lawmakers that viral online videos suggested the vaccines bear a protein with “a metal attached to it.”

Her baseless remarks — which also suggested that vaccines “interface” with 5G cellular towers and would impact sperm DNA — didn’t elicit strong pushback from legislators. Her comments were made during testimony in favor of a bill that would prevent businesses or the government from requiring proof of vaccination.

“I’m sure you’ve seen the pictures all over the Internet of people who have had these shots and now they’re magnetized,” she said. Her claims have resulted in three million views to a video she posted, and attracted coverage from The Washington Post, and other major news outlets.

During a recent episode of a Stew Peters (Red Voice Media) talk show, guest Jane Ruby, who described herself as having a medical background, claimed magnetism was being intentionally added into COVID-19 vaccines. The claim is simply not true. A clip of her comments posted on BitChute on June 7 has been viewed at least 40,000 times. Red Voice Media regularly shares misinformation and conspiracy theories.

The reaction in the Ohio Legislature was not fact-based.  Instead of pointing out that science does not support the false claims that vaccines aren’t safe, some GOP representatives thanked Tenpenny for testifying in front of the Ohio House Health Committee. One praised a podcast she hosts as “enlightening in terms of thinking.”

Rep. Jennifer L. Gross (R-Ohio), a nurse who co-sponsored the bill and in a previous meeting compared businesses that require vaccinations to the Holocaust, (showing she has no concept of what the Holocaust actually was) said “What an honor to have you here.”

Over the past month, false narratives about magnetic vaccines have risen to prominence through viral videos on TikTok and other platforms, prompting fact checks from Reuters, Snopes, and other fact-checking sources. All have been shown to be false and promoted with the express purpose of suppressing the American vaccination response.

More than 600,000 Americans have died from COVID-19, and while the rates of infection, hospitalizations, and deaths are dropping across the country, pockets of outbreaks continue to crop up, overwhelming local healthcare systems. The new Delta variant is many times more infectious and dangerous than the original, and children 11 and younger still cannot be vaccinated, making them more vulnerable than ever.