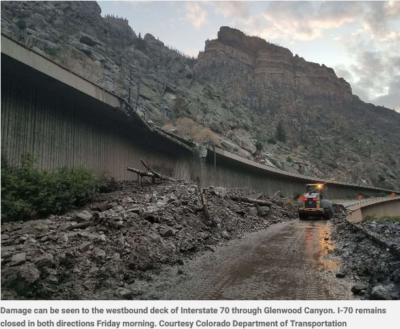 The bridges of I-70 through Glenwood Canyon had severe damage during the flooding following the Grizzly Creek Fire. Photo courtesy of Post Independent

In the past few days, U.S. Senators John Hickenlooper and Michael Bennet announced that Colorado is receiving the first portion of $225 million in funding to fix hundreds of bridges in poor condition. Colorado has 481 bridges in poor condition, spread across the state which serve county, state, and federal routes. The exact amounts have not yet been divided among Colorado’s 64 counties.

The funding is part of the recently passed Bipartisan Infrastructure Bill, which Hickenlooper helped write. This is the largest investment ever to fix America’s bridges.

“Colorado’s bridges are vital but too many are near the point of failure,” said Hickenlooper. “Our Bipartisan Infrastructure Bill is restoring our infrastructure one road, one lead pipe, and one bridge at a time.”

“I’m pleased to welcome the first round of this critical funding from the Federal Highway Administration to help Colorado repair and modernize bridges across the state,” said Bennet. “Thanks to the bipartisan infrastructure bill, we are finally making significant overdue investments to create jobs, boost our economy, and support our Colorado communities.

“The Biden-Harris Administration is thrilled to launch this program to fix thousands of bridges across the country – the largest investment of its kind in U.S. history,” said U.S. Transportation Secretary Pete Buttigieg.

Colorado will receive $45 million for bridges in Fiscal Year 2022, and a total of $225 million over the next five years. The funds, which are part of the Federal Highway Administration’s Bridge Formula Program, will help Colorado replace, rehabilitate, preserve, protect, and construct highway bridges.

“This record amount of funding, made possible by the Bipartisan Infrastructure Law, will allow states and Tribal governments to fix the bridges most in need of repair,” Deputy Federal Highway Administrator Stephanie Pollack said. “It will also modernize bridges to withstand the effects of climate change and to make them safer for all users, including cyclists and pedestrians.”

Thanks to the Bipartisan Infrastructure Bill, all 50 states, Washington D.C. and Puerto Rico, and tribal transportation facilities will receive $27.5 billion over the next five years, which will flow into local economies, to fix approximately 15,000 bridges nationwide. Federal funds will pay 100 percent of these costs.

More information on the funding announced on Friday afternoon can be found HERE.