Fire Danger is Rising All Across Central and Southern Colorado

All across the central and southern mountain areas, the fire danger is rising. This coincides with people, who have been cooped up in metro areas under coronavirus Stay-at-Home orders, heading to the mountains for the first holiday weekend of the summer. This could make for a tense fire season.

With crowds already surging into the mountains, some mountain counties, including Chaffee, Custer, Eagle, Garfield, and Lake have moved to Stage 2 Fire Restrictions, which prohibit open fires of any kind. 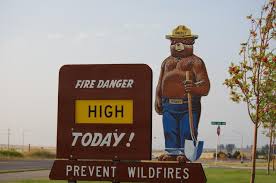 On top of the Stage 2 restrictions, red flag warnings have been called for the past several days, which are issued when the National Weather Service forecasts a combination of strong winds and low relative humidity. This low humidity dries out grasses, shrubs, and other fuels. Repeated days of strong winds dry out the terrain and can easily whip a small fire into a much larger fire situation.

It was already dry after a lower-than-normal winter snowpack and the fire danger has moved into the high range. Chaffee, Saguache, and Fremont counties, which experienced last fall’s Decker Fire, are understandably cautious.

The Bureau of Land Management put BLM lands in seven counties under fire restrictions on April 14: Chaffee, Lake, and Park counties were moved to Stage 2, while  Stage 1 Fire Restrictions were placed on BLM lands in El Paso, Pueblo, Teller, and Boulder counties.

“While we’re dealing with the pandemic, this might be our next disaster,” said Chaffee Director of Emergency Management Rich Atkins. ” We’re under a red flag warning again starting tomorrow, we’ll likely be under it all weekend … the conditions are such that we could have another disaster come up.”

Mountain Counties now in some stage of fire restrictions:

“Closing any site is not a decision we take lightly, but protecting our visitors and employees remains our highest priority,” said Trujillo. “We are working with local, state, and federal partners to determine the best path forward to safely increasing access.”

Since early April, snowpack levels in the southwestern part of the state have fallen precipitously; a rapid slide as temperatures rose quickly and spring runoff began early, from what was a slightly above normal snowpack. Conditions in the Arkansas River Basin are similar, where the only drainage area with measurable snow now is Fremont Pass. This early runoff continues a  trend of earlier, and diminishing, snowpack peaks.

Many mountain counties are worried about the same thing: on top of the coronavirus known as COVID-19, the last thing mountain county administrations want to worry about right now is a natural disaster.

“We’ll have a lot more to keep our eyes on if we don’t start getting more moisture,” said the Chair of the Chaffee Board of County Commissioners Greg Felt.