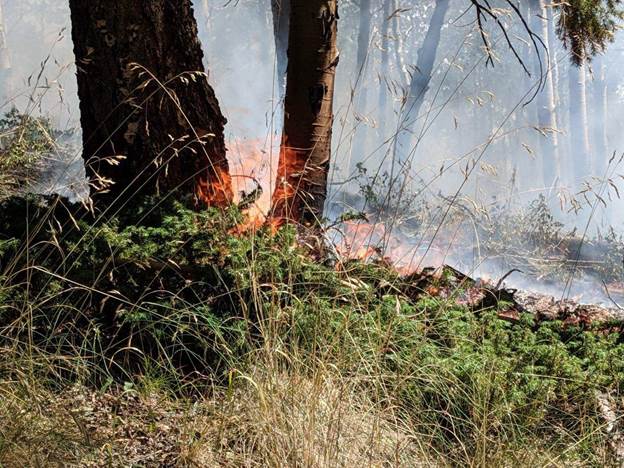 A fire named the ‘Decker fire’ was one of four fires that broke out in the San Luis Valley Sunday, Sept. 8. The Forest Service is on the scene and monitoring the fires.

A press release from the United States Department of Agriculture stated, “Weekend storms resulted in four fires started by lightning on the Rio Grande National Forest. The largest of the four, the Decker Fire started on Sunday on the Saguache Ranger District. The Decker Fire has grown to 98 acres and is burning on a south-facing slope in the grass under aspen stands. The location of the Decker Fire in the Sangre de Cristo Wilderness area presents an opportunity to use fire as a tool to restore ecological processes.”

According to Forest Fire Management Officer, Chad Lewis, “having personnel walk to fire long distances, over rough terrain increases safety concerns. There is no immediate threat to private land, structures and other infrastructure. At this point we are actively monitoring fire behavior, weather patterns, and fuel conditions to assure protection of these values,” added Lewis.

The Salida Ranger District has encouraged Chaffee County residents to sign up for the emergency notifications system for more updates and alerts for local fires and emergencies. If conditions of the fire change and if the fire were to get closer to Chaffee County, residents will be notified.

Ark Valley Voice will provide updates as we hear about them from local authorities and forest service offices. Updates will also be posted to the Forest Facebook page at U.S. Forest Service – Rio Grande National Forest.