Fires, Droughts and Dust Storms: Colorado’s Extreme Weather Events in the Past Year

This year, Colorado has seen the two worst fires in its history.  On top of this, the dust levels in the Great Plains have doubled in the past 20 years. Both are examples of the real impacts of global warming and the changing of our climate. 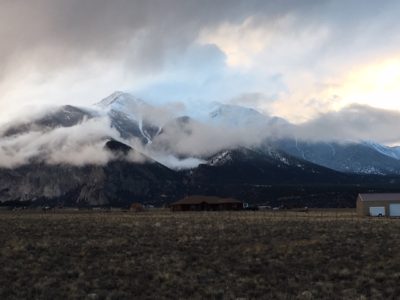 Currently, the Trump administration has taken a firm stance that Global Warming does not exist, however, the extreme weather events experienced across the country tell a different story.

California experienced its first-ever giga-fire, meaning the Complex Fire burned over one million acres. These fires highlight the changing of the climate. When most speak or think of climate change, it can seem like a distant thing.

But the impact of ever-greater acreage burned per fire shows it differently. According to Professor of Ecology and Director of Earth Lab at the University of Colorado Boulder, Jennifer Blach, fall wildfire events are common due to fast downslope winds, however, to see multiple events start this late in the season is extremely rare. 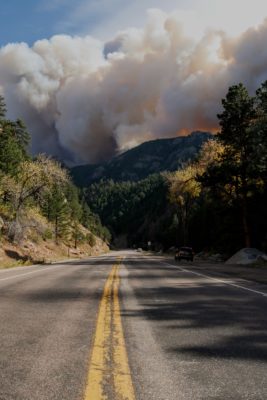 Taken on the day the calwood fire started from the peak to peak highway. Showing the smoke plume created from the fire after growing to 8000 acres within the first 5 hours also capturing the empty road with the smoke behind it. Image by Malachi Brooks. Courtesy of unsplash.com

There are currently seven active wildfires across Colorado. The fire season is in part due to the compound issue of short-term natural climate variability layered with fundamental changes to the long-term climate from global warming. According to the Colorado Climate Center, Colorado is experiencing a drought for the first time since 2013. Fully 97 percent of the state is in exceptional, extreme, or severe drought categories.

The senior water and climate research scientist at Colorado State University, Brad Udall told CBS News “This year was shocking because we had a decent winter and on April 1, we had 100 percent of the snowpack. With 100 percent of snowpack, you’d expect a decent runoff year. Instead, we ended up with 52 percent of what is normal.”

This water runoff is important because how quickly it melts determines water availability for soil and vegetation. The decrease in runoff is due to an increase in evaporation brought on by significant heatwaves in the state.

The high country isn’t the only landscape impacted by rising temperatures and climate change. In October, a storm reminiscent of the dust bowl swept across the Great Plains creating a wall of dust that could be seen from space stretching from eastern Colorado into Nebraska and Kansa.

A study conducted by Gannet Haller, an atmospheric scientist at the University of Utah, explained that these dust storms have become more common and more intense over the past 20 years, due to frequent droughts and the expansion of croplands. Haller even went as far as to say that the result of this study suggests a tipping point that mirrors the return of conditions of the 1930s dust bowl.

These dust storms remove soil nutrients and decrease agricultural productivity while also presenting health hazards, according to Andy Lambert the co-author of the study and a meteorologist at the U.S. Naval Research Laboratory. This dust contains ultrafine particles that can penetrate cells in the lungs, impacting people with long conditions like Asthma, and causing cancer and heart disease.

Lambert told sciencemag.org that he found the trend unexpectedly while reviewing data from NASA satellites that remotely measure atmospheric haze caused by smoke and dust. Lambert and his colleagues were able to push the trends back more than 20 years through combined satellite data. Recent studies show that climate change is drying out the region. According to a study published in Nature Climate Change, it shows that greenhouse gases have created heatwaves similar to those in the 1930s. 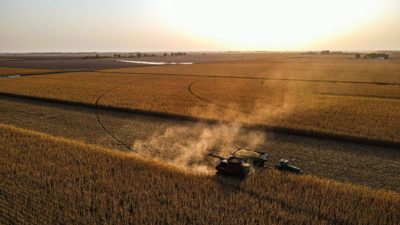 A study published in Science predicts that the United States is on the brink of a megadrought.

Agriculture expansion is negatively impacting this even further. Grasslands are plowed for corn growth near refiners that turn corn into biofuel which was sparked by the U.S. policy that encourages renewable fuel. This soil is then left exposed at critical times of the year. Haller explained that the new study identifies a strong connection between new cropland and downwind areas.

It is possible that the county could see a repeat of the 1930s climate with wind-borne dust carrying away vital nutrients from the soil that leads to crop losses and the need to plow more fields. Recent research shows the worst of the dust in the 1930s came from marginal grasslands throughout the plains which disappeared due to deep droughts and exposed soil to the wind. Global Warming altering regional climate patterns strongly suggests that the country may face another Dust Bowl.

Colorado faces challenges at both its highest peaks and thousands of feet beneath them on the great plains. The state’s current drought further shows that the climate is changing here and now — right before our eyes.

Now more than ever, science will be the guide to solving these issues and maintaining the state we love and call home. That or we may end up with larger fires and a growing inability to grow crops.